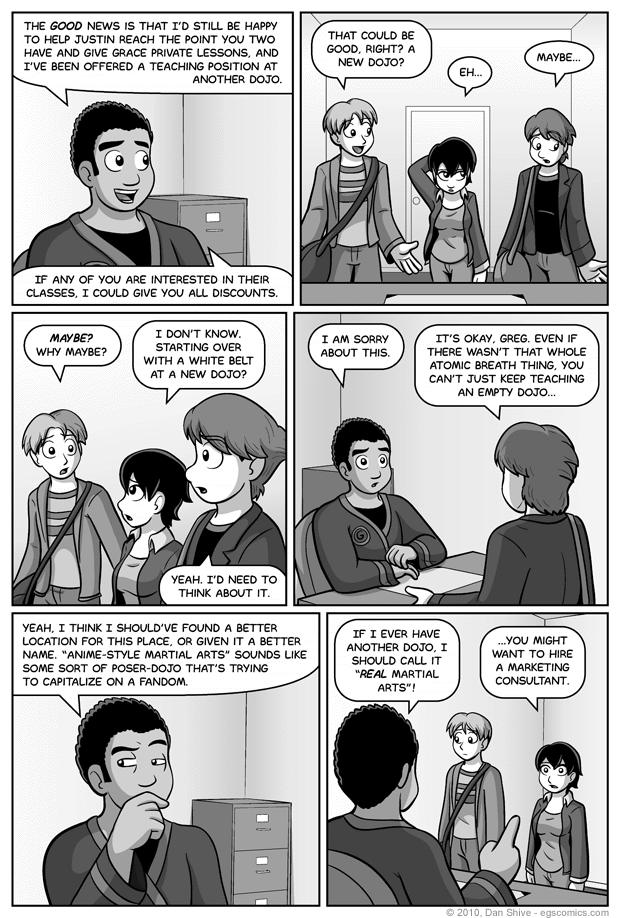 Posted August 27, 2010 at 1:00 am
Blargh. This is the second version of this comic's commentary, as I wrote up a fairly long first version and then decided it would imply certain things that would amount to big spoilers if I posted it. I've saved it for posting with a future comic, but still. BLARGH!

This leaves me with another problem. What CAN I talk about in regard to this comic that wouldn't amount to spoilers? Um... OH! The dojo's location!

Okay, there was a joke in an early comic about the location of the dojo. I HATE that I made that joke and what it effectively established about the location. I found it funny the first time I wrote, but have thought it stupid and inconvenient ever since. It is one of the most tempting retcon-targets in the archives. It makes me want to borrow George Lucas's magical digital time machine and tear it to shreds.

I've also commented on not liking the name for the dojo, and while that's true, that isn't really the problem with the anime-style martial arts dojo in EGS. I'll go into detail about that in a future (and possibly already written) commentary.

On a final note, if anyone is wondering where Nanase's bag for is, her's doesn't have a shoulder strap, so it's just sitting on the ground by her. See, this is the hard-hitting inside info the fans craves.