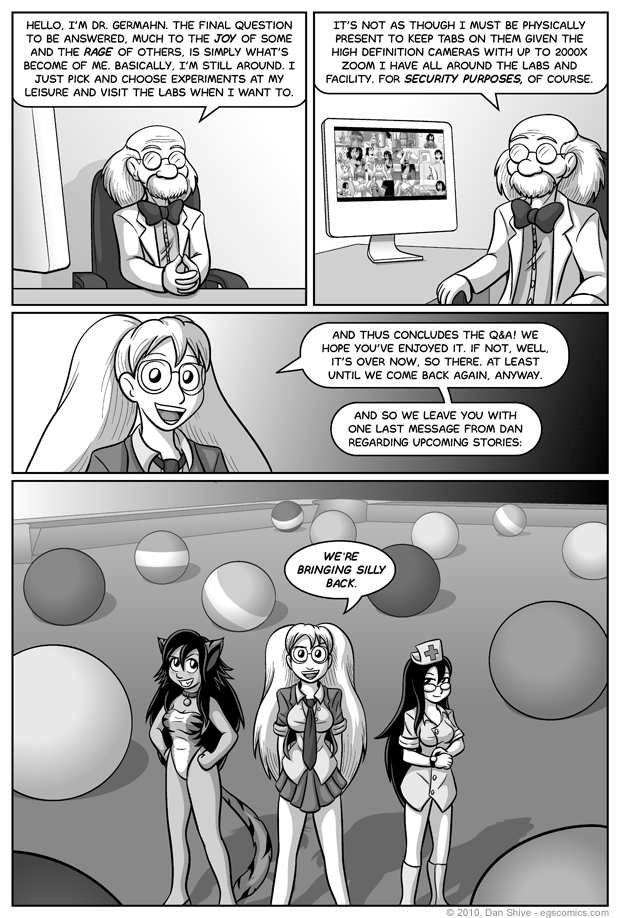 Posted February 26, 2010 at 1:00 am
And thus ends this Q&A. I'd like to thank everyone who submitted questions and gave polite feedback, be it positive or negative, regarding it. Also, thanks for simply reading the comic in general. Story comics return next week.

Dr. Germahn's monitor contains various scenes from the Q&A. It turned out smaller than I'd hoped, but it's fair to say that the scenes chosen for his screen are of a "particular" nature. Lisa, Amanda and Chika are at 5% normal size and on a pool table. I'm not certain what they're doing there or where they got those outfits, but they're declaring silliness and the bringing back thereof, so just about anything fits.

As I said before, I thank those who gave polite feedback. I especially thank them in light of the fact that some people weren't so polite after the comic that had my avatar suddenly show up to rant about bathrooms. I got some bewilderingly angry and rude responses to that, and it was at that point that some people chose to angrily declare their dislike of the Q&A in spite of that being the same time I announced a definite end point of one week later.

The Q&A comics were intended as a fun intermission, a chance for me to work ahead while developing new techniques and designing sets for backgrounds, and just generally winding down a bit after Sister 2. My hope was to have some fun and share it with all of you.

After the angry responses of last week, including one that suggested that I get over the bathroom door handle issue or "do everyone a favor and die", I was more than discouraged. I, too, got angry. I'm trying not to be, but I still am a little.

Again, I'm fine with someone not liking everything, or even anything, that I do. The expectation that everyone, or even the majority, will like my work would be ridiculous, if not insane. In addition, constructive criticism helps me improve and fix what could be better. When people respond with anger and rudeness coupled with a seeming sense of entitlement to something I've worked hard on in an effort to entertain, however, I start to wonder what exactly their problem is.

That said, I can't help but assume the people who were specifically angry about the bathroom door handle rant don't wash their hands after doing their business. Just saying.