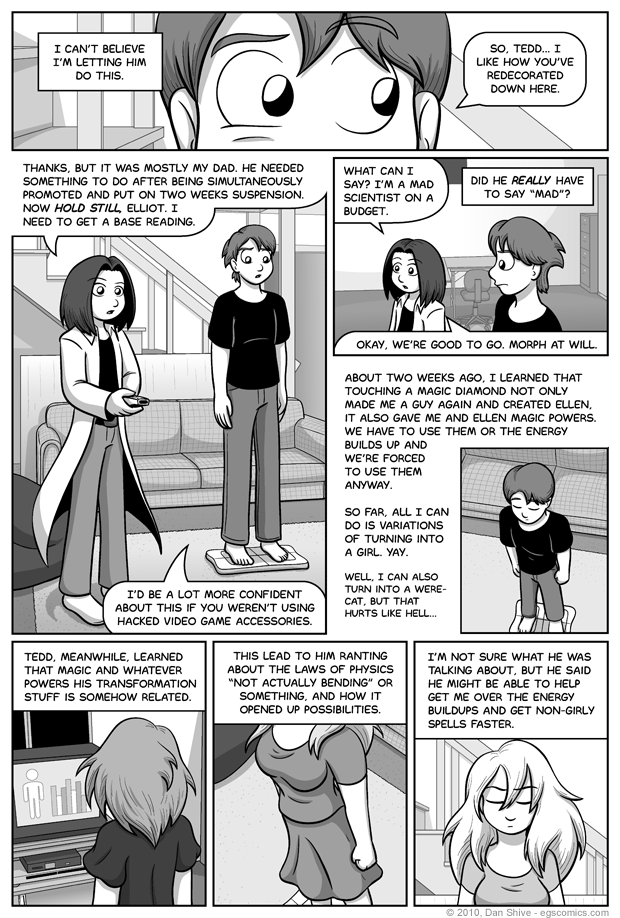 Posted March 1, 2010 at 1:00 am
The full title for this storyline is "Indiana Elliot And The Temple Of Swedish Furniture". This first comic may not live up to any declarations of silliness, but that title alone should tell you something. It's also worth noting that this will be, if all goes according to plan, the first story comic in a future book, and it was written with that in mind.

I don't intend to do every future storyline this way, but it's something I've wanted to try for a while. Many of my favorite books and TV shows are presented with first person narration, and it makes jumping into whatever they're thinking, in my opinion, a bit more natural. It's not THAT much of a deviation from previous comics, as thought bubbles have frequently been employed. This is mostly just limiting it to a specific character and giving them narration duties to boot.

One thing I expect to be criticized as gimmicky is Tedd making use of hacked video game equipment, but it's based on a real thing. The military buys up Playstation 3's for their inexpensive but considerable processing power, many people use Wii remotes (AKA "Wiimotes") when inventing things, and Wii Fit balance boards are used by health rehabilitation centers in place of equipment that would otherwise cost them thousands of dollars.

The fact of the matter is, modern video game technology is so advanced and inexpensive relative to other options that it has become more and more commonplace for people on a budget to use them. They're still relatively expensive for a high school student, but I feel it's better than having all of Tedd's tech come from his Dad's work or having things even more ridiculously expensive than gaming equipment.

Besides all that, it shows that he is capable of making the modifications. Granted, this is small potatoes in the long run, but Tedd's back on track in his pursuit of mad science and the road has to start somewhere.