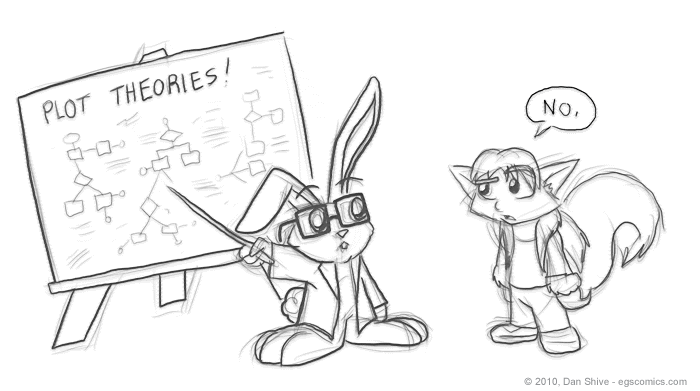 Posted August 10, 2010 at 1:00 am
I think it was fate that the first big story arc in EGS had "so much conclusion" jumping as a theme. In the history of EGS, I have witnessed some pretty wild speculations, and I've also witnessed people getting up in arms over things that would be proven inaccurate within a few comics time, if not the next comic.

I love that people are so enthusiastic, but there are times when it takes all my will power to not tweet, post, or otherwise communicate by a means other than the comic itself that a popular theory is completely and totally wrong. This usually happens after I've evidently been wrong about how clear I've made something (i.e. "you mean I didn't have someone mention that detail? Aw crap").

The most recent story comic is an example. Within the commentary for that comic, I refer to another comic giving the current one disturbing implications. The next story comic should clear up what I meant by that (and if not, the commentary will), but I've already made a note to myself to be less vague in the future given the number of conspiracy theories that have resulted from it ^^;