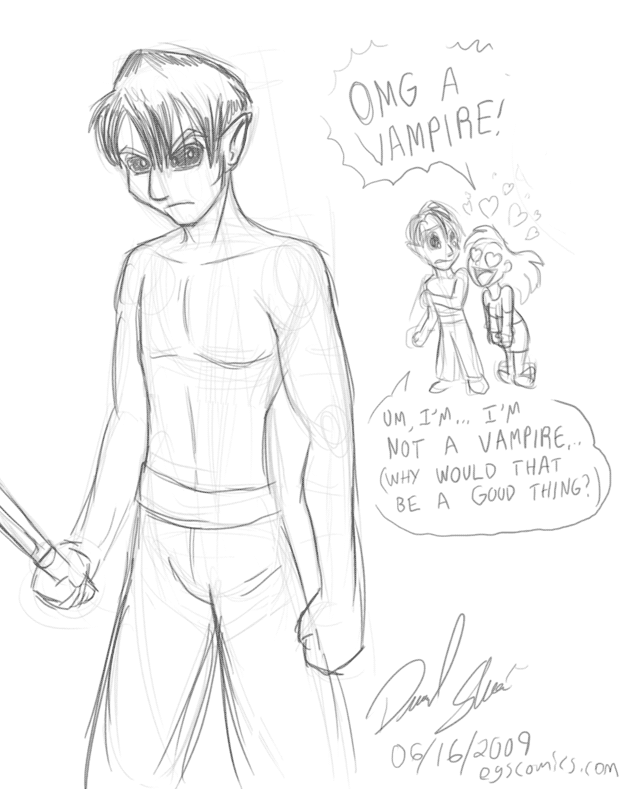 Posted June 19, 2009 at 1:00 am
The first thing you probably noticed about this (beyond Raven being shirtless) is the eyes. I was originally plotting to give him freaky black eyes, but I wound up deciding against it. For one thing, it would be really hard to get to look right given that he has black hair and I want the eyebrows down low. The other is that it doesn't make SENSE. He has immortal ancestry, so the ears make sense, but immortals don't have freaky black eyes, so why would Raven? It's just trying too hard.

I love the idea of "young Raven" having fangirls, hence why I drew him with one. I also like poking fun at vampire fangirls (you heard me right, Twilight fans). I, too, ask the question of why it would be good for someone to be a vampire. It's like being prey and jumping gleefully at a predator.

Of course, I have friends who like things like Twilight and I am not opposed to the idea of it, but I am genuinely confused about the vampire attraction angle. I get eternally youthful and sexy, but the whole "I'm going to drain your blood and enthrall you" angle is what has me confused. I'm guessing it's the bad boy struggling to be good and the fantasy of giving into an alluring seduction that drives it.

In any case, I'm biased when it comes to the undead (you're alive or you're dead, dammit!), so it's only natural I'd be a bit baffled by sexy vampires ^^;