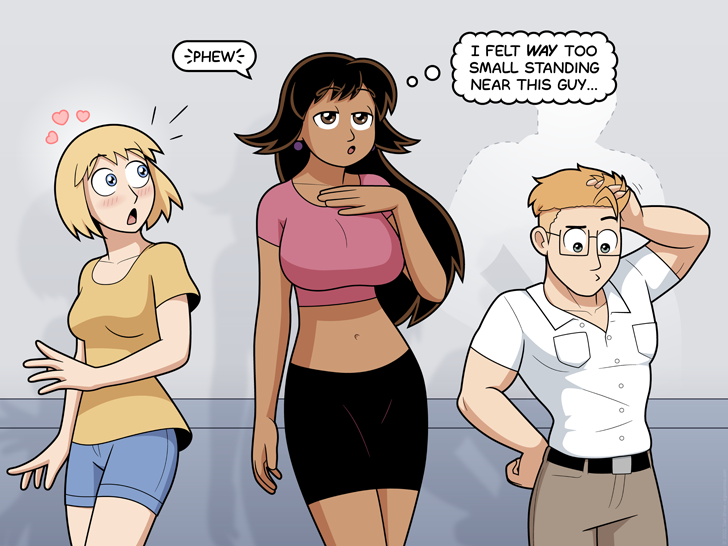 Rhoda, only five feet tall to begin with, had an exaggerated sense of scale of top of it. People who were bigger than her seemed even bigger than they actually were to her, and it could occasionally make her feel anxious.

So when she found herself in line behind Conan, an unusually muscular man who was nearly six and a half feet tall, she felt about three feet tall.

Behind her was Diane and Lucy. She could politely ask to switch places with them, but that would be embarrassing, and truth be told, Rhoda wanted to keep her place in line. There were limited supplies of arguably-adequate pizza on the line.

Naturally, the rational thing to do was to exchange heights with Conan, and as Rhoda was secretly a powerful magic user, this was an option for her.

For some reason unknown to Rhoda, changing both of them took less effort than simply growing or shrinking one of them. Rhoda could think of several reasons why this shouldn't be the case, and how it wasn't actually an equal exchange, but magic seemed to have its own rules about the value of things.

Rhoda didn't need to make it easier, but it would feel good to be the tall one in the room for once, so that's what she did.

Now that she was nearly six and a half feet tall (were she to stand up straight), and Conan was five feet tall, she could relax. She let out a sigh of relief.

Diane, who'd been talking to Lucy, heard Rhoda sigh, and turned around to see what was up. She was astonished by how attractive Rhoda suddenly appeared to her for some reason, and was too caught off guard to ask what the sigh had been about.

Diane felt guilty about this. She had literally just been talking to Lucy, her girlfriend. Diane might have felt better had she realized Lucy was experiencing similar feelings.

Conan, meanwhile, was sure something was off, but he wasn't quite sure what.