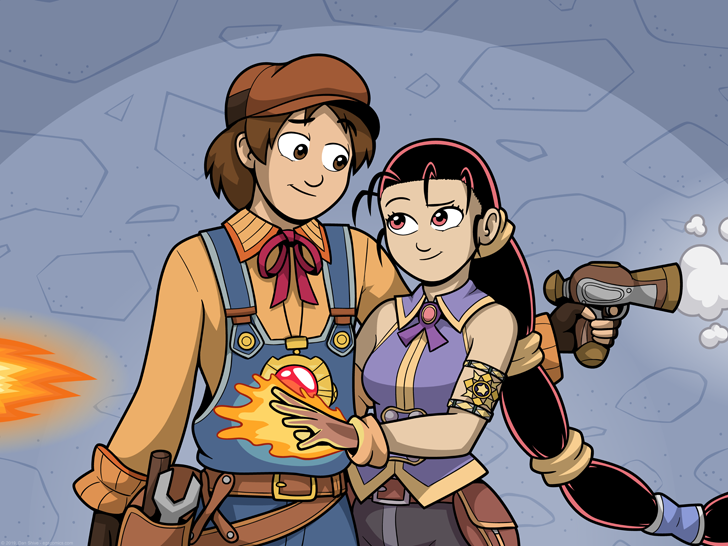 Description - Elliot as Max and Ashley as Monica from Dark Cloud 2, Ashley with the 5-Star Armlet item.

Dating Advice From An Introvert With Little Interest in Dating

You guys, I'm not sure if exploring a dungeon and collecting items to build up houses and new weapons and such is a good idea for a date.

Genuinely, I'm not sure. I've never been. My idea of dating is finding a nice place to have a chat, get some food, and maybe cuddle. I'm assuming dungeons are none of those things, but as I've stated, I've little first-hand experience within them beyond games in which I've mostly been a silent protagonist, and my most frequent companion has always seemed put out by the various burdens I would ask her to carry.

Something I enjoy about coloring Ashley is that I consider the highlights for her hair color flexible. I originally planned to have them be green and always be green, but I found it just so incredibly limiting in what colors worked for her clothes that I decided her hair would generally have brown highlights.

Given the previously established green highlights nonsense and the subsequent change, however, I consider it somehow appropriate to change up her highlights whenever it suits me

I generally consider her eye color less flexible, but in this case, I made an exception due to how much better I think it goes with everything else (and it is the eye color of the character she's dressed as, too).

Prior to drawing this, I decided I should play a bit of Dark Cloud 2. It's available on PS4, and with the share button, I could get some sweet reference material. In addition, I'd played the first Dark Cloud way back in the day, and I'd had quite the soft spot for it.

That said, I haven't gotten terribly far in Dark Cloud 2. I've been busy, and it's a bit of a slow start with a myriad of cut scenes. I haven't gotten to the part where things open up a bit more with village building and more characters.

Also, I, ah, might be used to autosave being a thing, and DC2 was originally a Playstation 2 game, and, um... I might not have have saved as often as I should have, and...

Let's just say some significant portions had to be replayed after I got cocky, and leave it at that.

This is a horrifically overdue sketchbook reward, of which there will be some more in addition to the milestones. Requested by MacGyver Smith