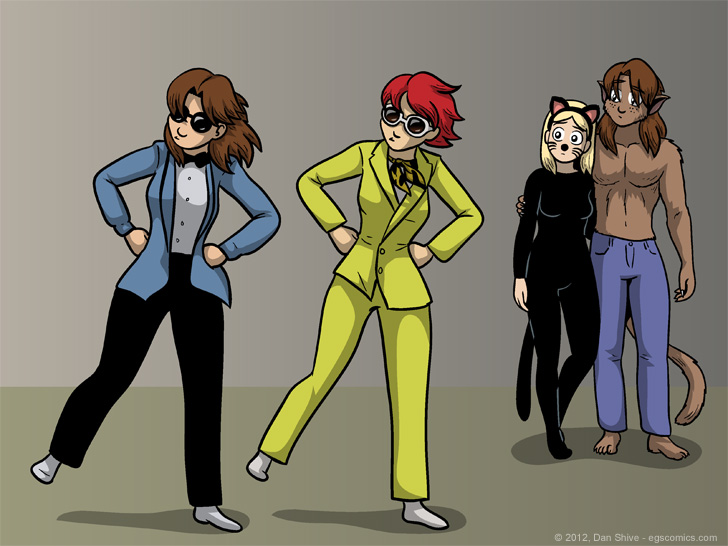 As many of you probably already know, what with the 417,000,000+ views on YouTube, Ellen is dressed as South Korean rapper Psy. Based on the Wikipedia article on the music video that inspired this, Gangnam Style, I believe Nanase is dressed as Yoo Jae-Suk, a South Korean comedian who cameos in the video.

For those who haven't seen it, you can watch the music video on Youtube and add to its massive view count. It's a bit of comedic social commentary. If I may quote Wikipedia quoting Psy:

"People who are actually from Gangnam never proclaim that they are—it's only the posers and wannabes that put on these airs and say that they are "Gangnam Style" — so this song is actually poking fun at those kinds of people who are trying so hard to be something that they're not."

I'm not sure what happened to the blue background from the previous entry, but hey, the colors in Tedd's basement tend to fluctuate based on the needs of the foreground anyway. Also, furniture is prone to vanishing.

Speaking of the previous entry, I forgot to mention that Elliot's a bit more buff in his cat form, and slightly taller, too. This isn't a new development, however. His kitty form was always supposed to be a bit beefy. What is a new development is that as my style has evolved, the fur on his cheeks makes me think more and more of muttonchops.