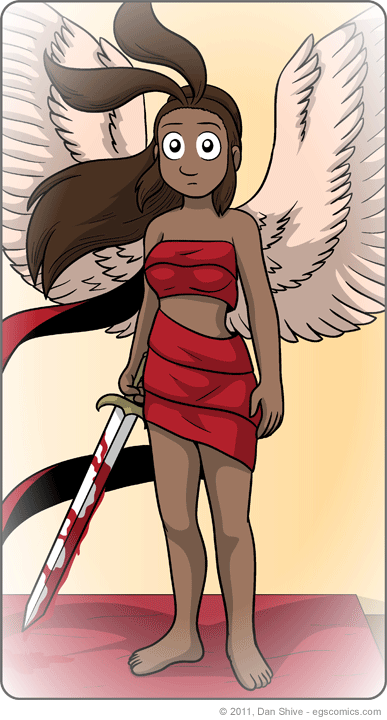 Posted June 21, 2011 at 1:00 am
I received a lot of requests for colorized Angel Grace, and given how much trouble I've been having settling on a final script for the ending of New and Old Flames, I decided it was time to give it to people! In the hopes that they don't kill me! Hooray!

New and Old flames really did become a lot more complicated than I thought it was going to be. I genuinely set out thinking it was going to be about the same length as Hammerchlorians, but as it got going, I decided to include ( A ) instead of having it later, then ( B ) jumped in... the whole thing snowballed into the longest storyline in EGS history. Seriously, it's longer than Sister 2., and that was the storyline that made me vow to try and stick to shorter stories.

At this point in the writing process, I know what's left to show. The main thing is the order and how it affects the tone, and that's where I've got a bit of a writing block right now. I THINK I've got it sorted out, but even if I don't, I'm going to go with what I've got and hope for the best.