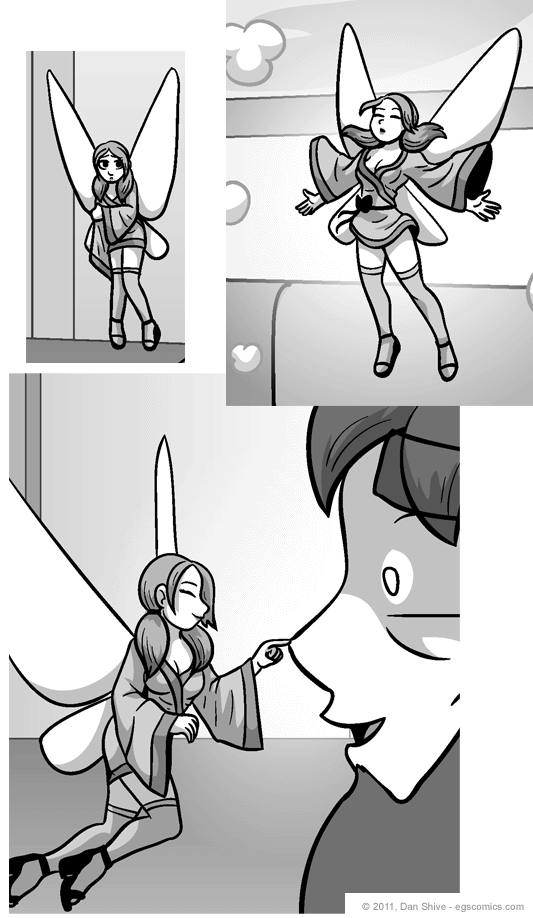 Posted June 4, 2011 at 1:00 am
Obvious zooming-in on images of Dex's fairy from this comic. I decided after all the time I took to draw her, I wanted to actually show more than the tiny versions in the comic itself (yes, I really did bother to give her lipstick in every panel her mouth was visible in regardless of how small she was going to wind up).

I've pretty much said all I've wanted to say already about this awesome cute fairy of awesomeness who is most definitely awesome, so instead I will talk about something tangentially related, Zelda 2. Zelda 2 was the second Zelda game (as the cleverer among you have already deduced), and while it broke form from the other games by being a side-scroller and possessing a level of potential frustration beyond other games in the series, it did include a few awesome things.

One of these things was the fairy spell. This spell allowed Link to instantly turn into a fairy and fly around the screen. It was cool in many ways, and may well have warped my fragile little mind. From a gameplay standpoint, it was cool because you could morph to avoid pit-deaths, fly places you couldn't normally get to, and fly around enemies.

From less of a gamplay standpoint, I just thought it was cool that Link had a morphing ability. As you may have guessed, I think transformation is cool. As a kid, I imagined that fairy Link looked mostly identical to Spryte from the infamous Legend of Zelda cartoon, except with Link's hairstyle and mandatory silly hat. This should probably come as a surprise to no one.

It's a spell I would like to see return to the Zelda games, even if it is just a miniature normal Link with wings. For one thing, flying around in a 3D perspective, when done properly, is very fun. For another, it would be cool to see the enemies from another perspective, along with everything else. Imagine Link fleeing not from a mob of small angry chickens, but instead a mob of giant ones, or even just one relatively giant chicken. It could genuinely be fun (and hilarious).