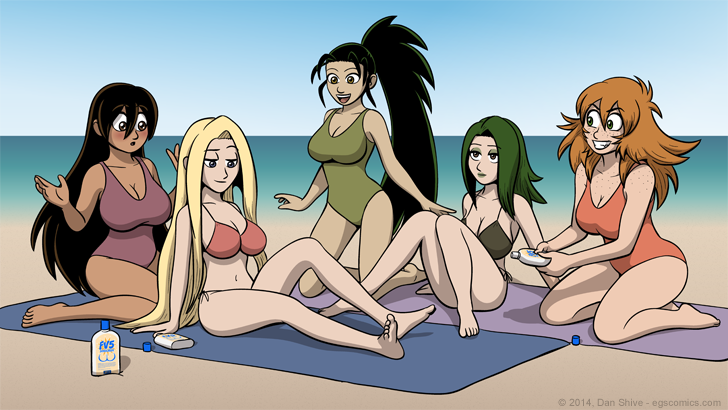 Requested by Anonymous - Ashley, Rhoda, Catalina, Diane, and Liz V5'd and in swimwear.

In my mind, the greatest thing about this sketchbook is Ahley and Catalina's hair, particularly the latter. As I tried to sort out just how to make Catalina's hair longer, it got more and more nuts. Good times. I'm not entirely sure what she has planned for that sunscreen, but I'm sure it's not mischievous*.

* I absolutely know, and it totally is mischievous.

I'm not sure why Liz is wearing makeup at the beach, but it's one of the quickest visual indicators of "this is Liz", so wearing it she is.

And thus concludes this month of Patreon funded sketchbooks! There'll be even more next month, though I won't know exactly what day until this month's Patreon campaign is finalized. It's basically going to be every weekday starting the weekday when having one every weekday would perfectly last until the end of the month (looking like next Thursday at the moment, but we'll see).