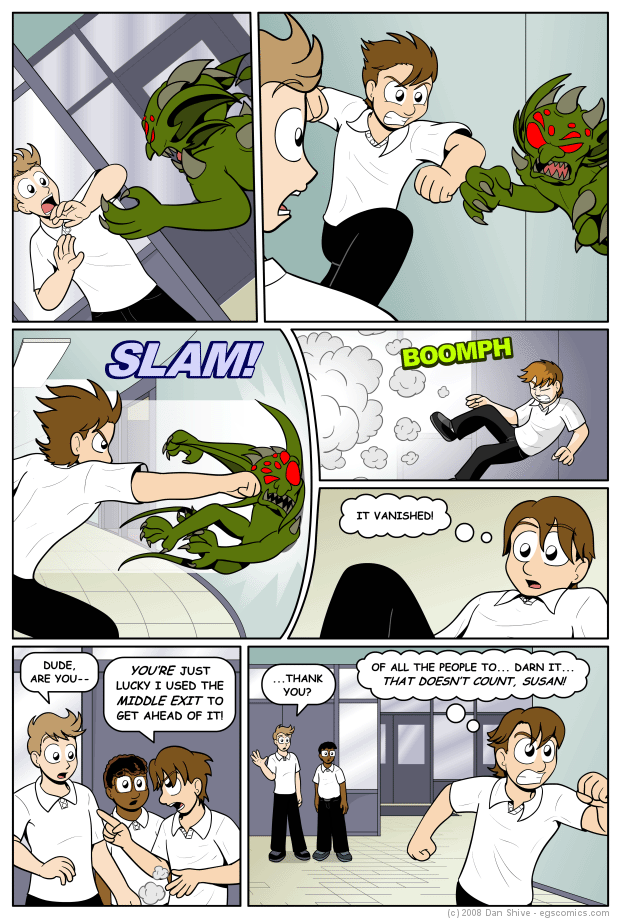 For as simple as this page is, I found it very difficult to both stage and write. I had several scripts for future pages done before I finished the script for this one.

I like the background in panel 3, primarily because it is a twisted one-point perspective used to distort the image to imply more force behind Elliot's attack. I don't think I've ever done that before while using an actual vanishing point, so it's at the very least a fun experiment.

One might wonder why the first two panels have no text, or any speed gradients, etc. The intent is to give the impression of a very quick moment being shown in slow motion. Sounds could, and definitely would, be made in those two panels, but it's all happening so fast that I believe having anything like the previously mentioned things would make it feel like Elliot had more time to save Tony than he did.

Although, I must admit, it was tempting to put a "to be continued..." gag narration in the first panel.

Speaking of saving Tony, I've been in Elliot's situation before, though not quite to the "punch a dangerous monster" extent. The situations I speak of are when I've felt obligated to help someone I didn't particularly like. I'm not talking obligated due to a job or anything, just personal "I'm going to feel guilty all day if I don't help" sort of thing.

There was one time in particular when I angrily gave lunch money to someone I was annoyed with when they forgot their wallet. They didn't ask for money, and were somewhat confused as to why I was being so angrily generous, but they got some food out of it so they weren't really in much of a position to complain about my mysterious "how DARE you make me feel empathy towards you" rage.