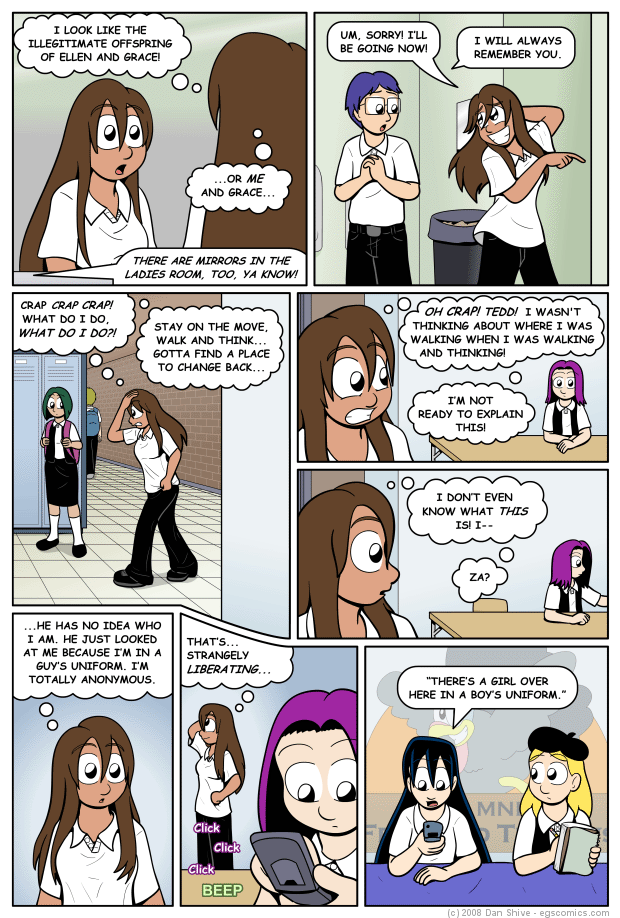 Before I get into discussing the appeal of being anonymous, I'd like to say I hope Elliot's thoughts here are amusing. I think they are, anyway, but they're definitely being used for narration and exposition, and I know not everyone likes that. Can't please everyone, of course, but I'm hoping even those who don't care for exposition-by-thought can find some humor and/or interest in what he's thinking. I know I've pulled that sort of "I wasn't thinking about where I was walking while I was walking and thinking" stuff before, and it's always embarrassing.

Also, I guess the shippers have an excuse to ship Elliot and Grace now. Shine on, you crazy shippers. Shine on.

I have always had an interest in transformation to the point that I can't really explain why I like it. It just seems to be an innate part of who I am. I can attempt to rationalize it, however, and one rational is the ability to become anonymous while still knowing everything that I knew before about everyone else. I would love the opportunity to just transform for a day, go places that I would normally go, but be treated like some new person that's never been there before.

It sounds odd, but people do it all the time online. People sign up for forums and chat rooms under different names, alts, aliases, whatever. Even if one doesn't, it is more common that not to have a sense of anonymity and freedom online that one wouldn't have if everyone knew exactly who they were. Imagine that, but offline and in real life. I find that idea very appealing.

Granted, a lot of people who go online use their anonymity to be jerks. I would like to think I wouldn't, but I must admit it would be a bit wicked to hide in plain sight like that regardless of how one behaved while doing so. It still appeals to me, however.