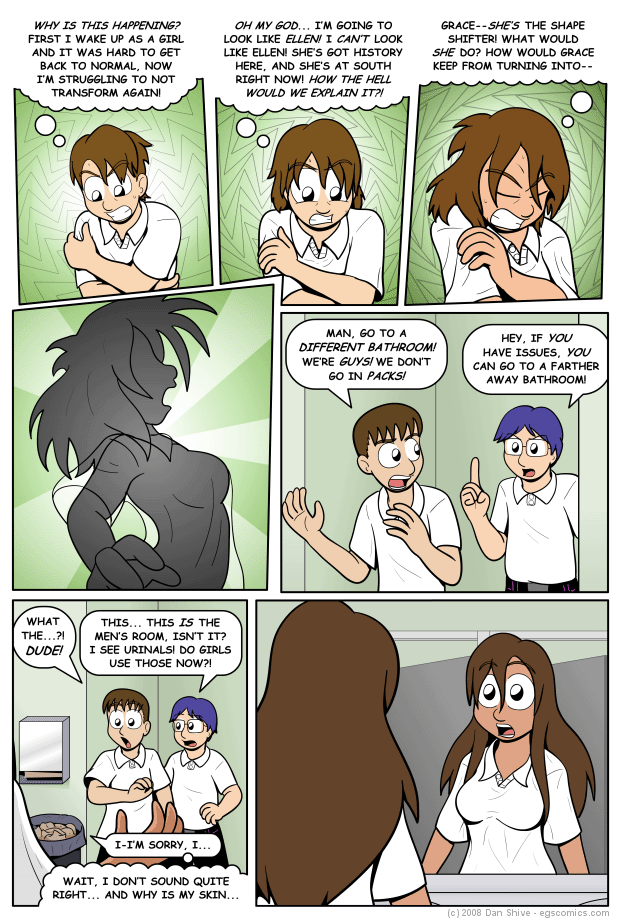 I call this the "Gracelyn" form, though the characters might come up with something else to call it, assuming they ever give it a name at all. Darn disobedient characters... Anyway, as far as this mystery is concerned, noting the hue differences between the first two panels and the third may be worth doing.

That extra with the brown hair has been in the comic several times now, enough to have earned the title of minor character. I suppose any extra that speeks or does something of significance could logically be upgraded from simple extra to minor character, and this is the guy who announced to everyone that Susan was doing something about the uniforms, so he definitely qualifies. The guy who is with him does as well, though this is his first appearance. I kinda like his design, and when I like a minor character's design, they're likely to turn up again.

Speaking of things that I like, each school is winding up with a lot of secondary characters, which means Moperville as a whole now has a more fleshed out population. Not only is it fun to be able to recognize people when they show up again, it makes it easier for me when a scene calls for extras. It's also fun, at least I think it is, to keep track of who has witnessed what, and to consider what awkward moments could result from it.

Another thing this comic seems to have a lot of these days is bathrooms. I used to find it odd that they spent so much time in the unisex bathroom in Ally McBeal, and now just about every other scene in this comic includes a bathroom. Given characters seeking privacy and the convenience of big mirrors to look in after transforming, it makes sense, but it's still a bit odd. At least I'm getting better at bathroom details. Look! A paper towel dispenser and trash can! HOORAY!