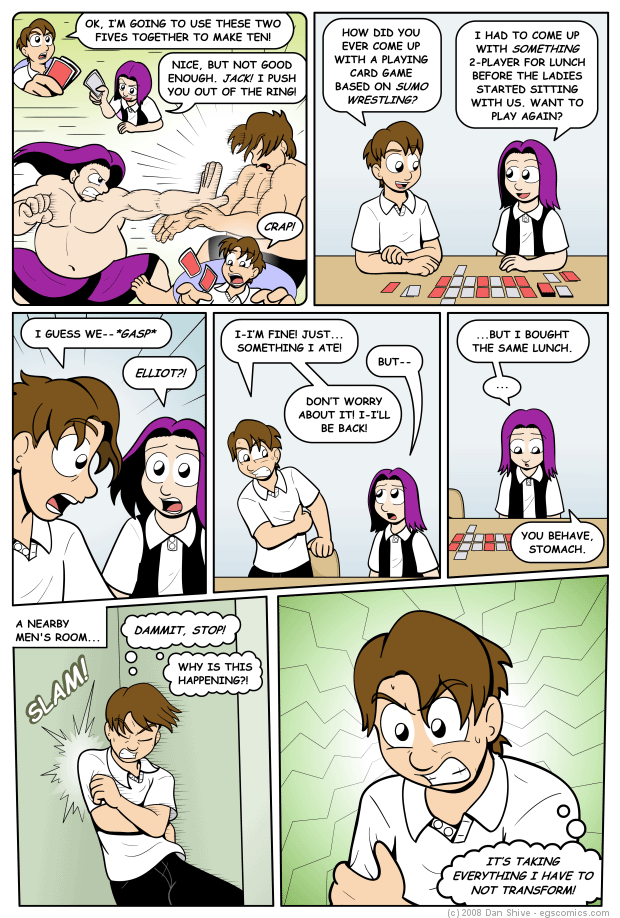 The rules for this game were missing for a while, but a reader found them, and they're back at the bottom of this commentary!

While I did recently do a review of a bean bag chair with the word "sumo" associated with it (Future edit: A review that I don't seem to have anymore), the game in this comic has nothing to do with that. The game they're playing is an actual playable game that I invented in High School for pretty much the same reason Tedd said, except in my case it was for a study hall period. As with most card games, it is ideally played from opposite sides of the table; Elliot and Tedd are positioned as they are simply for artistic convenience.

I've posted the rules for the game, along with some sample images. The game is pretty simple once you know how to play, and I've done my best to cover everything and make this easy to understand. I don't commonly write up rules for games and haven't done extensive play testing for a while, however, and may make edits to clarify things based on feedback. I will announce any such edits in the news (Future edit: I don't have a news section anymore). If you have feedback to give, you can get my current e-mail address through this link.

The reason this is specifically a sumo game is that I was interested in making my own games in high school, and was looking for simplistic concepts to work with. Sumo Wrestling seemed like a good, simple concept: push the other guy out of a ring. That's a major simplification, of course, but it's what got me looking into sumo wrestling. I was originally hoping to make a sumo wrestling computer game in QBasic (*shudder*), and wanted to incorporate authentic sumo terminology and moves. As such, I did a lot of research, and learned how impressive sumo wrestlers actually are. Anyone who says they're just fat guys pushing each other around hasn't done their research.

Speaking of authenticity, yeah, I know. Real sumo wrestling and what's going on in panel one of this comic look vastly different, but it's a reference to E. Honda from Street Fighter. He might have been in Street Fighter games other than II, but the 10,000 versions of Street Fighter II are the ones I remember and played as a kid.

The Sumo Card Game is a two player game that uses a standard 52 card deck. Jokers may optionally be added to make it a 54 card deck, but are not required. The goal is to gain advantage each round and push your opponent out of the ring. 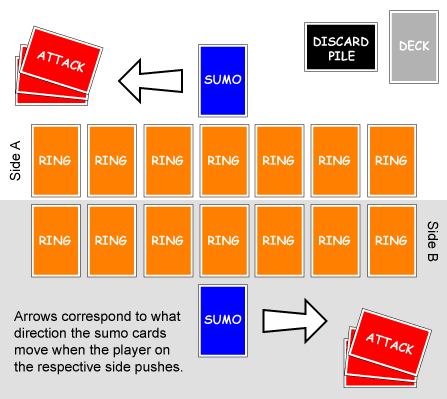 1. Shuffle the deck, and deal out two seven card rows of facedown cards between the players. These represent the ring, and will be referred to as ring cards. Each pair of cards make up a column, so there are two rows, and seven columns. Each row is assigned to each player, as are the sides of the ring. If playing across from each other, each player should take the side to their right.

2. Deal out two cards, each face down and on opposite sides of the ring at the center columns. These represent the sumo wrestlers themselves, and will be referred to as sumo cards. sumo cards are associated with the player who has same row.

3. Deal out three card hands to each player. These are attack cards. The remaining cards make up the deck. At the end of each round, each player will discard attack cards they have used that round into the discard pile, and draw from the deck until they have three attack cards again.

(Explained in detail further down)

Players attempt to "push" each other using the attack cards in their hands. Each player selects an attack card from their hand, and places them face down. Once both players are ready, the cards are flipped over. The player with the higher number pushes the other towards the pushing player's side of the ring. In the event of a tie, the round ends with nobody being pushed. Face cards push harder than Number cards, and Aces push hardest of all.

There are three classes of cards: Number, Face, and Ace. Each class is progressively better at pushing the lower classes. 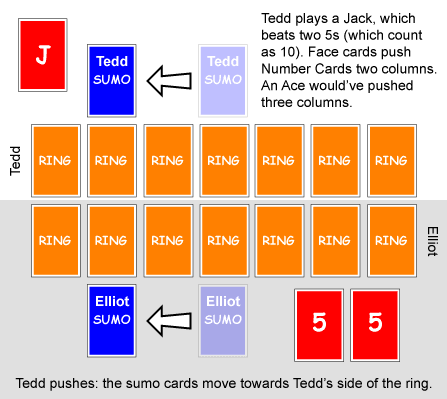 If still facedown, it is possible to prevent pushes by using ring cards and sumo cards, though sumo cards can only be used if the ring cards in the current column have already been used. Note that only the pushed player can challenge the results, and that it is entirely optional unless not doing so would cause them to lose once pushed.

If the pushed player loses the challenge using ring cards, or the ring cards are already face up, they can still challenge the push using the sumo cards if they are still face down. This works exactly as challenging does with ring cards, except there can only be one sumo card challenge per game. It is, in essence, a last ditch effort to not get pushed out of the ring.

Once again, note that only the pushed player may make challenges. The pushing player cannot issue a sumo card challenge to try to still push after losing a ring card challenge. 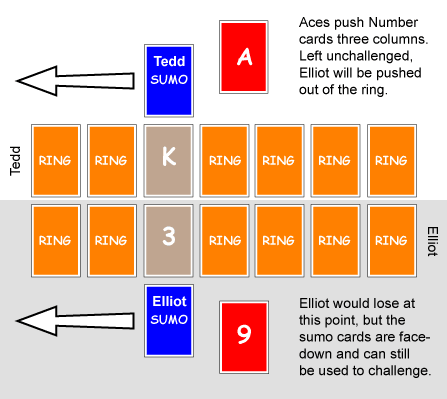 Elliot's not beat yet, however, as their sumo cards are still facedown. Elliot's sumo card turns out to be an Ace, and Tedd's is a 2. 2s are wild, so Tedd draws from the deck, but gets a 4. This second challenge succeeds, and Elliot is not pushed . The sumo cards are now face up and cannot be used for challenging again, and do not move this round. 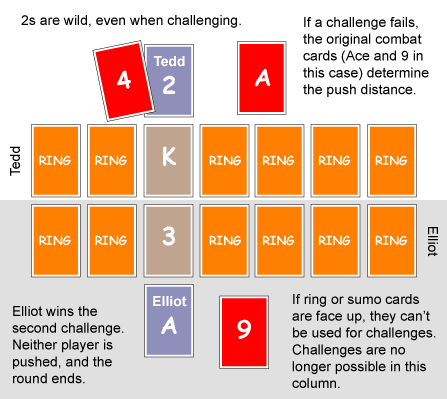 Note that even though Elliot got an Ace versus a 4 during that final challenge, Tedd is not pushed. Challenges prevent, and do not cause, pushing for the current round.

Also note that Elliot would have lost had he not challenged the push, so he had no choice but to do so. If the pushing had been such that it would not have cost Elliot the game, he would not have had to challenge it. It can be good to save the ring and sumo cards when only facing a one or two column push, depending on how close you are to either side of the ring.

At the end of the round, assuming nobody has won, the attack cards used this round are placed in the discard pile, and each player draws from the deck until they each have three attack cards. If the players care about the order the players draw cards in, determine that order before the game.

If the deck runs out of cards, set the discard pile facedown and shuffle it. It then becomes the new deck that cards will be drawn from.

And that's the game. Play cards, and push your opponents out of the ring. Enjoy!