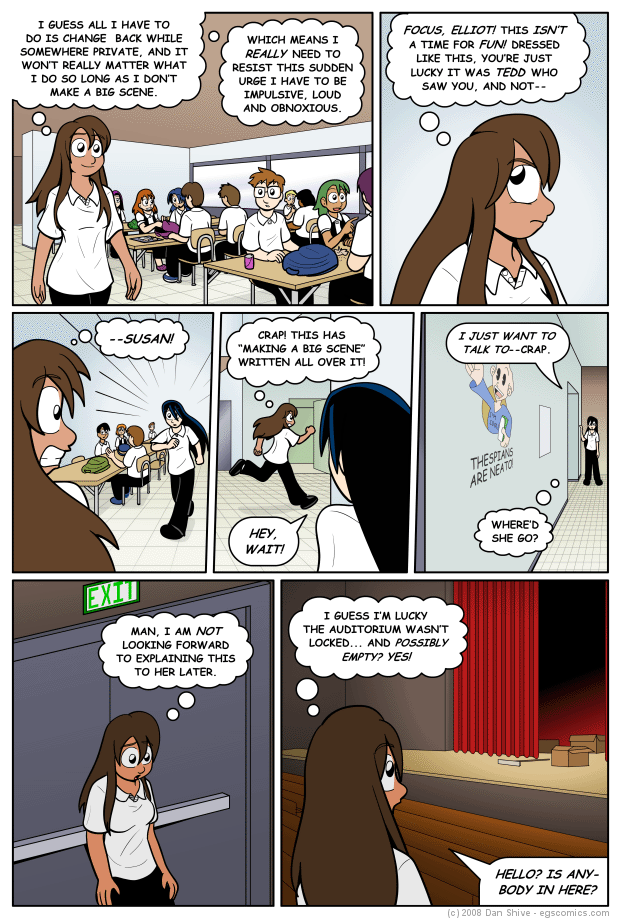 Elliot's sudden urges are a continuation of the anonymity appeal that I discussed in the previous commentary. On the one hand, it is a commentary on the effects that being online and anonymous have on some people. On the other, it's a commentary on anyone who normally holds back suddenly finding themselves free of inhibitions. I think it would be hard to not seem obnoxious under those circumstances, or at least not the first few times. I figure it'd eventually reach the point where the novelty would wear off, at which point I can only assume the obnoxiousness would decrease somewhat.

Okay, I know the drawings in this page aren't perfect and I've got a ways to go before snooty gallery types will look at my work and sip wine with approval and not disdain, but I am fairly pleased with the backgrounds in this comic and the amount of time it took me. This page would have taken me forever a year ago, if I could have pulled it off at all. In the grand scheme of things, it's nothing special, but it's a personal best as far as backgrounds are concerned.

Which, incidentally, really makes me wish I'd done a better job with panel five. I mean, it looks okay, but it doesn't convey what I wanted as well as I would've liked. Specifically, I wanted to show a long hallway, Susan from the front (for contrast with previous panel), and the door to the auditorium. As the last panel shows, the door frame should probably be a fair bit farther down based on the size of the auditorium.

Speaking of the auditorium, getting useful references was harder than I thought it would be. I had to do much hunting, and really all I was looking for was something similar to my old high school's auditorium. The layout and general position of this auditorium in the school is based on my own high school experience, which isn't meant to be a comment on my old school. This is a case of "draw what you know", and I only went to one high school, so it's really the only one I have any significant memories of being in to refer to.