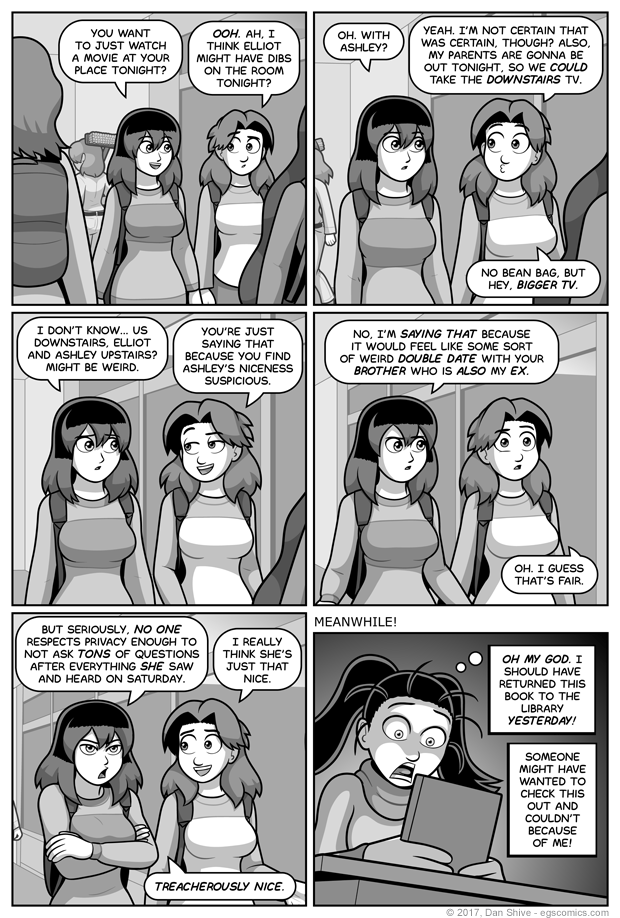 I originally wanted to put a joke cover on that book, but a) it distracted from the flow of Ashley's thoughts, and b) it was referential humor plenty of people wouldn't get.

That said, the book title would have been "Hermione Dresden And The Winter Fae", basically a mashup of Harry Potter and The Dresden Files in which Hermione takes on the role of Harry Dresden (a wizard detective). At least, I think that's what I meant to imply. Take it however you like, really.

I try not to speak for the comic (which can get tricky, what with commentary under each one), but I hope it's clear from the last panel (and previous Ashley moments) that I'm not trying to set her up as being deceptively nice or insincere.

Heck, we've seen her insincere and lying . She hides it poorly.

Also, looking at those older comics, I'm thinking I should draw Ashley's... whatever you call those hairs sticking out in front a bit thicker than I did on this page.

I don't always count how many panels I've written properly (easier than you might think with editing), and this comic was only originally written without that last panel. For whatever reason, I thought I had six panels without it, and found myself having to add something to make this comic naturally fill a full page.

Which actually worked out, because I was happy to reinforce that Ashley's niceness is genuine, but there was a brief moment of panic upon realizing that. "I thought I was DONE writing this oh no...!"