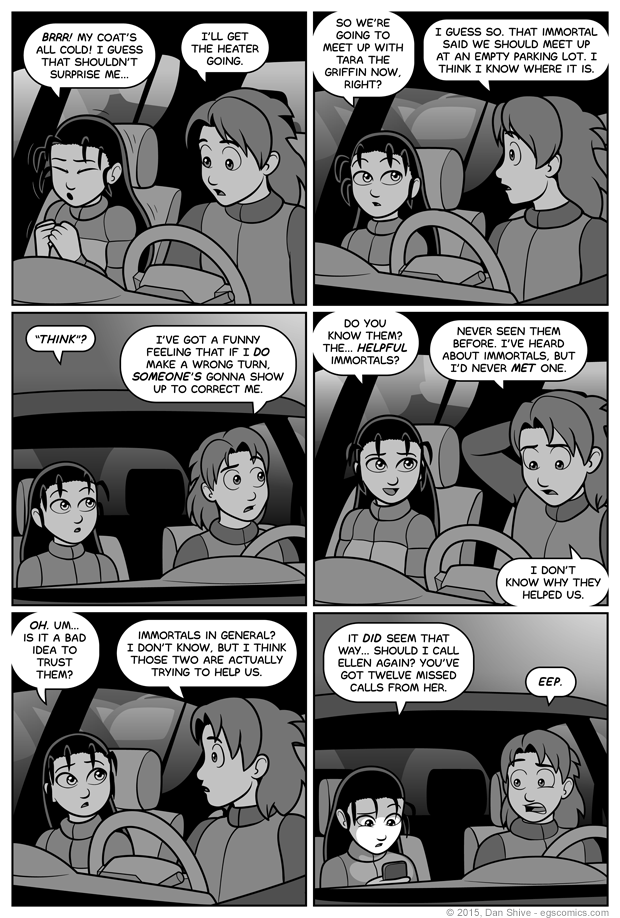 Soon, I shall rant about sleep and the schedule, but FIRST! A note about Elliot's transformations.

A lot of people were confused in the previous comic when Elliot was able to transform from Cheerleadra directly to Elliot. I had apparently given a lot of people the impression that Cheerleadra had to transform into a secret identity form first, but that isn't the case. It's been implied that Elliot has to be become Cheerleardra to assume a secret identity form, but never stated that Elliot can't go from Elliot to Cheerleadra and then right back to normal.

I believe the origin of the misconception was people misremembering the exact details of this one comic with Elliot explaining his use of the party form to Sarah, and the confusion is understandable. Elliot didn't mean he couldn't go back to normal from Cheerleadra. It was meant to imply it was a choice between his normal form, or one of the secret identity forms.

I stayed up late to finish this comic before going to bed. Outside of some special circumstance, I intend it to be the last time I do such a thing.

My sleep schedule has been horribly erratic for months now (maybe even over a year?). While this has generally been due to my attempting to get comics done on certain days of the week, it hasn't been good for the update schedule or my health. I'm making it a point to decide on a sleep schedule and stick to it. That might not sound like the cool, hip thing to do, but I'm over thirty now. I do things like say "hip" and stick to healthy sleeping patterns so I don't horribly damage myself both physically and mentally.

Well, the sleep part is to prevent that damage. I say "hip" because I'm officially old now, and that's in the rulebook. I also have to insist people stay off my lawn, and that modern music is terrible.

My goal for November is to stick to a healthy sleep schedule and to not miss a single EGS:NP or Story comic update. If I can do the former, the latter should come naturally. I get comics done a lot faster when I get started early in the day and have had a good night's sleep.

Talk is cheap, though. TIME TO SLEEEPZzzzzzz...