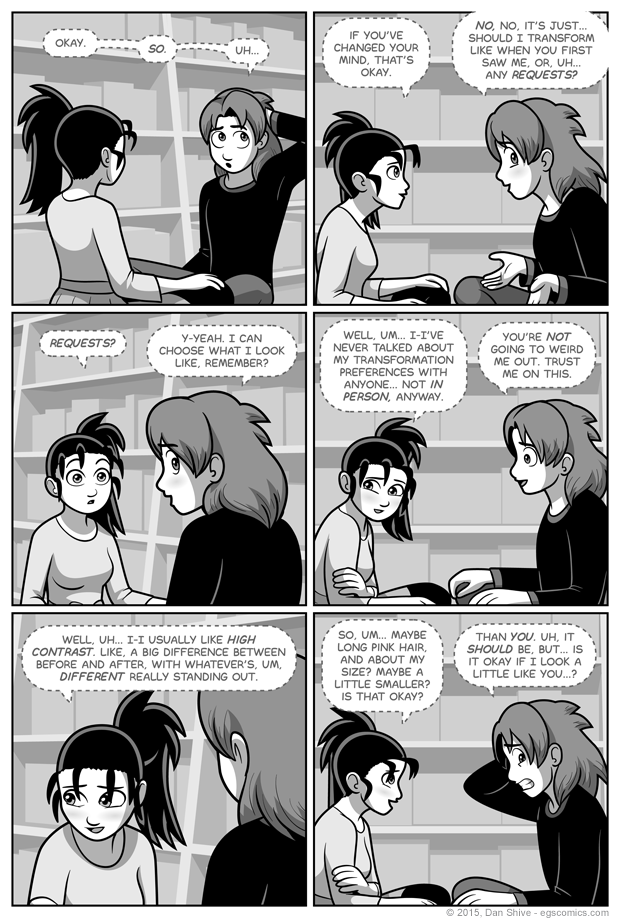 1776 is apparently an important year for the United States and an important ID number in the EGS archives. Unless of course I use a different system later, in which case the comic with Ashley seeing Elliot transform for the first time could have a completely different number or something else entirely assigned to it, and this will become SUPER CONFUSING.

Elliot's question in panel six might seem really odd, but it's really not. In fact, not only does it make sense, but it's been previously established why it makes sense. You have until Wednesday (or until you click the next button if you're from the future) to figure out what I mean by that.

I spent at least a half hour, maybe more, carefully inking the first background in this comic with lines meant to not distract from the characters while fully conveying the presence of books. Then I made all of those lines invisible, and found it worked better without them. YAY. GOOD. I'M GLAD.

Actually, I really am glad, because that took way to long. One thing I have to make peace with if I want to update according to a schedule with any reliability is that the backgrounds should generally be simplified. This is also true because I also need to work in greyscale to update as frequently as I want, and the characters need to stand out.

That said, it's noteworthy that I said "I have to make peace" and not "I've had to make peace", because it's totally a present tense situation. If it were past tense, I wouldn't have spent a half hour or more adding details to a background that only should've taken a few minutes.