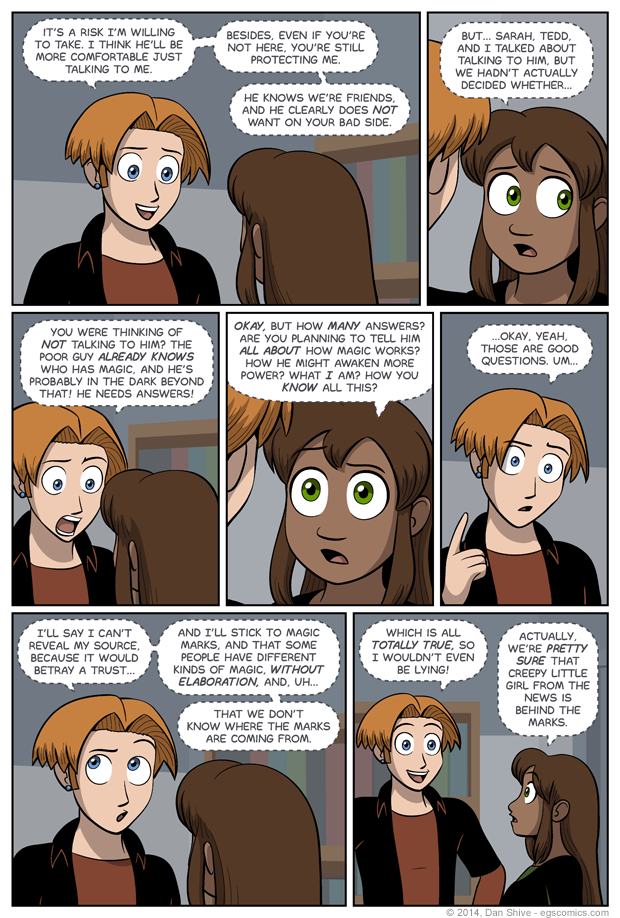 I really don't want to say too much about this that could show my hand regarding how much I agree or disagree with either of them, so it's a good thing I have something else to share!

In the previous comic's commentary, I mentioned how it would be a good idea to follow my EGS Twitter if you just want tweets about comic updates, and how my personal account  would have those and "off-topic tweets like my opinions on salads or whatever."

My choice of salads as a topic? Totally random. That didn't stop me from scheduling eleven hourly tweets about it yesterday. Here they are in chronological order, one per hour between 1:30 and 11:30pm:

You know, I really liked Caesar salad the last time I had it, but that was a while ago. It's not like I couldn't get some more if I wanted.

Caesar salad is pretty much the only salad I'm familiar with. I know other salads exist, but I couldn't tell you what they're called.

The one thing I know for certain I don't want in my salads are tomatoes, which is weird. I like ketchup and spaghetti sauce just fine.

I guess there are a lot of things I wouldn't want in my salad, but I feel it unnecessary to list things one normally wouldn't put in a salad

I guess you could make a salad out of anything, though. Like, if I arranged it properly, could I make a pizza salad? Would that count?

Look, I don't care what all you naysayers say with your naysaying! I'm making that pizza salad, AND IT IS TOTALLY A SALAD BECAUSE I SAID SO!

I have created the pizza salad. I have been strongly advised not to eat it, but they also said it's not a salad, so they can be ignored.

It's entirely possible that pizza salad was a terrible mistake.

If my pizza salad was proof of anything, it's that all salads are bad for you. Boycott salad! Eat vegetables arranged in a dish instead!

It has become clear to me that none of you actually know what a salad is and I've had enough of your sass.

For the record, I did NOT actually make a pizza salad. I'm sorry if this disappoints anyone.