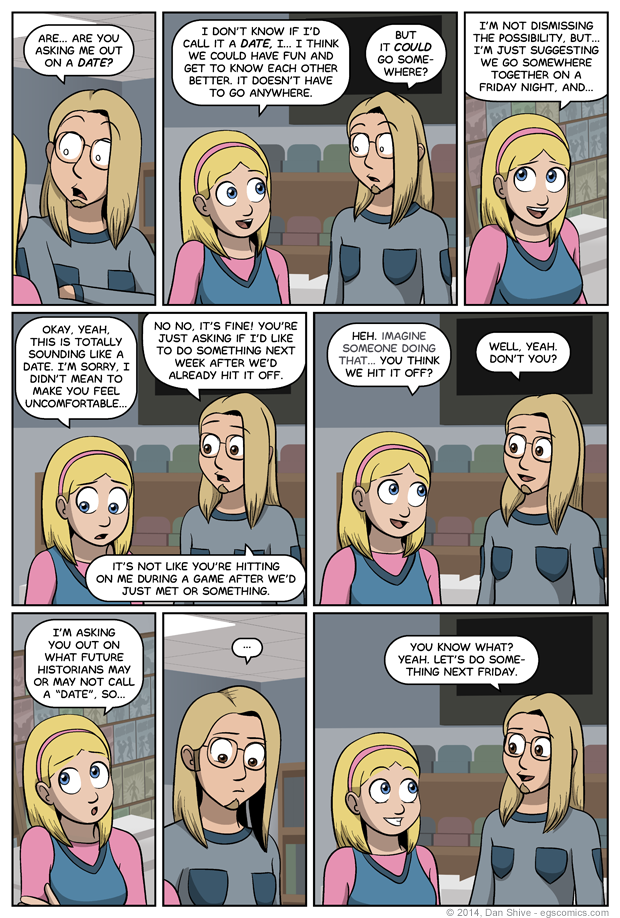 - That would NEVER happen

It's almost like they had an opportunity to get to know each other a little better while remaining respectful of each other and did so while not doing anything even remotely flirtatious or inappropriate during the match.

Sorry for the sass, folks. I didn't get a lot of complaints about Sarah asking Sam about doing being free next Friday (their time), but I did get a couple people saying that Sarah doing so was exactly the same as Larry basically introducting himself to Sarah by hitting on her in the middle of a card tournament at the start of their first game together.

Here we are, after they're done playing, after they've established a bond, where both are in a position where they can move a way from the other without forfeiting anything, where both are being polite to each other, and it's supposedly the same as Larry busting out the "hey, baby" talk to an effectively captive opponent.

SPECIFICS MATTER. If anyone wants to take issue with how Sarah is approaching this, that's fine. Claiming it's the same as what Larry was doing or that Sarah is a hypocrite for doing so, however, reminds me of that one guy in college who said Hedge's hair was ripped off from Cloud of Final Fantasy VII, i.e. generalizing to the point of absudity.

Okay, ranting done. Squeeing about Sarah and Sam going out on what may or may not ultimately be determined to be a date may now begin. SQUEEEEEEEEE~!*

* You are not obligated to squee. Dan is just personally excited about this development and hopes you are too.