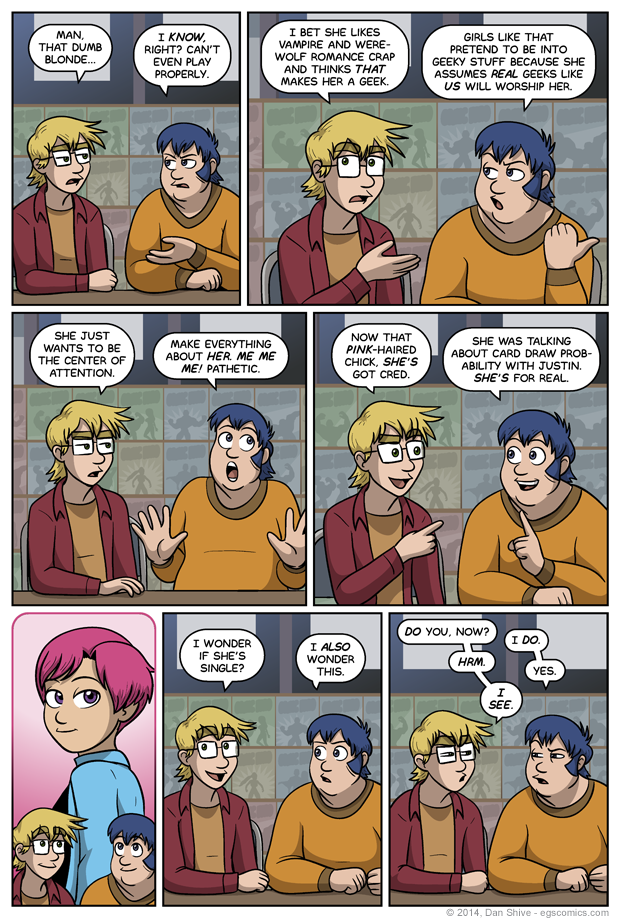 - Oh. Those guys.
- And that other time blue-hair showed up

I very nearly gave that blue-haired guy brown hair, but then I thought to myself "self, if you're going to claim all sorts of weird hair colors are natural in this universe, you need to show more weird hair colors! Also, Tensaided and George are already two heavy guys with brown hair, so, yeah. Change it up."

Bafflingly enough, the attitudes shown in the first three panels of this comic are inspired by those held by some real people. I wish I could claim it was a bizarre idea that came to me while in a sleep-like torpor state artifiicially induced by aliens who saw fit to fill my mind with crazy ideas, but no. Complaining about "fake geek girls" is a thing.

A thing most of you have probably heard about, but I'm holding out hope that there are readers who have never even heard of this sort of thing before on account of everyone they've met being so accepting of geeky women (which, assuming we go strictly by women I personally know, is around 90% of all women).

I actually did draw Tedd as female in panel five, but that just means the torso is slightly different (and it makes even less of a difference with those two guys in the way). The only "change" to Tedd's head is the expression.