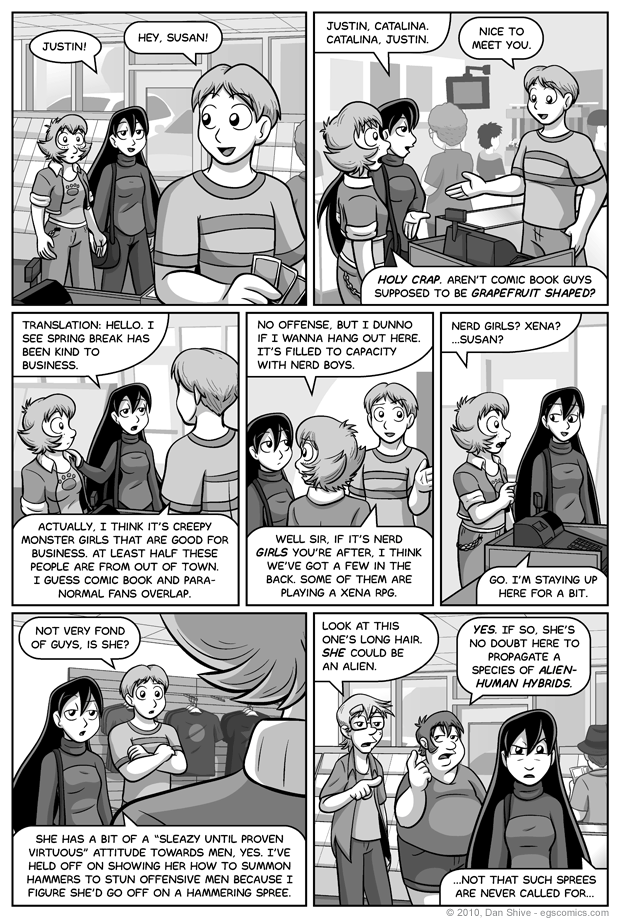 Catalina is one of those characters who would likely be rather frustrating to know in person, but is hopefully fun as a character in a comic. She's not intentionally mean, but she's definitely somewhat rude and has a temper. She's the sort of person I would likely initially want to strangle only to eventually find her bluntness charming and enjoy her company. Believe me, I speak from experience on this matter. I can think of at least four friends of mine off the top of my head who fit this description.

I was hoping to have her get excited about something other than a Xena RPG. It's a little on the nose, and from what I've head about the lesbian undertones of that series might come off as a bit stereotypical. That is exactly, however, why it made sense to have it be a Xena game. I'm assuming most people still know that Xena was a show about a badass action girl of the warrior and princess variety, which has the benefit of being something most people will get without me having to explain.

Catalina's likes and dislikes haven't been explored enough for there to be a "that's something appropriate to her tastes that would be in a comic store" stand in, so yes, I effectively went the generic route in the hopes of quickly conveying something.

That said, I've only actually seen one episode of Xena that I can remember, and I remember it being good. Xena and her spunky female companion were being coerced by some thief to go somewhere and do... something. I don't remember all of the details, obviously, but what I do clearly remember is it not sucking. It's a series I might one day consider renting, but given how long my current "check this bit of pop culture out" list is, it will probably be a while before I get to it.

I want people who have previously complained about the amount of exposition in previous comics to at least give me some credit with this update. Justin was perfectly set up to thoroughly recap information regarding Pandora showing up on television and paranormal tourists and what-not, but instead only said what he thought the reason for more customers was, why he thought that was the reason, and his rational for it. It may be exposition, but a recap it's not and it's only three sentences.

The lack of repetitive exposition in this comic is partly due to me treating Bringing Silly Back as a book, which helps me determine if and when something should be recapped and when certain things should be foreshadowed. Anyone who has read the previous storylines of BSB knows full well what Justin is talking about in panel three, so any clarifying dialogue that could have occurred is thrown of a bridge so that the plot may continue onward.

One thing I do sort of recap here that some may feel unnecessary is the nature of the hammers. Granted, the recap consists of the words "to stun offensive men" and is otherwise sandwiched in a non-recap that sets up a punchline. If one cannot forgive four words thrown in to vaguely remind people of something that hasn't come up in the story in years and matters to the current plot, then I truly do apologize for the agonizing pain those four words must have inflicted.

And yes, those two weirdos in the last panel were in a sketchbook entry. Thank you for noticing.

The layout of this comic shop is roughly based on a comic shop I used to frequent. The designs of two of the extras in panel two are loosely based on people I would hang out with at said shop, and one of them even used to work there. I assure you that the extra with the hat in the last panel is certainly not intended to resemble anyone in particular whatsoever, though it is apparent that he is a man.

This comic wound up being more of an experiment in backgrounds than I thought it would be. This is a scene where I felt it necessary to have a busy background, in part because the scene calls for a shop with lots of people in it, and partly because that's what comic shops are like. Granted, most of the people are in that "back" Justin mentioned (which feels more like the front given its proximity to the street) where the gaming tables are, but given what's been established it would seem contrary to not show at least a few extras in-panel.

Point is, I've been struggling with finding a desired middle ground for backgrounds. Something between gradients and fully detailed, aka something between throwing my hands up into the air in defeat and shooting myself in the foot.

While there is certainly room for improvement, I feel the outline-less shapes is a good approach for background elements that aren't being interacted with or focused on but should logically be visible. It gives strong contrast with the characters who are being focused on, something that has to be constantly monitored when working in a greyscale medium. It's a lot faster to put together, which is good when one is working by their lonesome and wants to update frequently, and it's not just random shapes and tone shifting. There's actual structure to the outline-less blobs that result in a minimalist background appearance while still portraying where the characters are relative to their environment.

So yeah, I'm pretty much sold on using the outline-less structured blob method when appropriate. If nothing else, the previous comic would have been done hours earlier had I been using it and probably would have looked better at the same time, so yay for time saving methods that up contrast while still allowing for busy backgrounds.