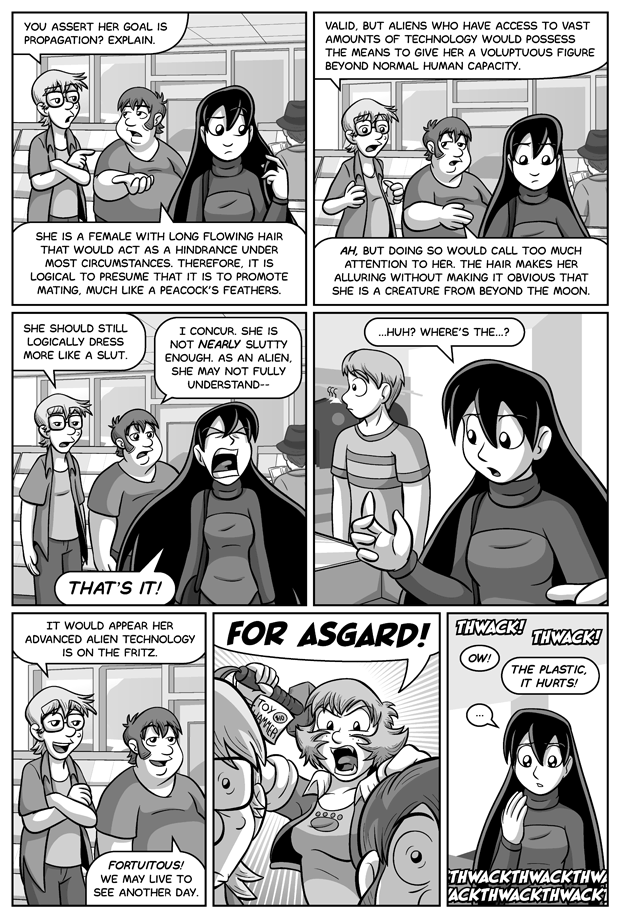 Posted April 19, 2010 at 1:00 am
If you're confused as to where Justin is looking in panel four of this comic, look behind his head in panel two of the previous comic. Do this, and you can feel the satisfaction of a master sleuth by figuring where Catalina got that toy hammer.

If you consider it odd that they have toy hammers, you might technically be right by present standards, but their presence is based on plastic hammers that were sold in comic shops in connection with the Thor franchise, hence the "for Asgard!" line. I didn't buy one, but I look forward to the Thor movie coming out as that will likely give me another opportunity to do so.

I like the dialogue between the two weirdo jerks in this comic and don't regret it going on as long as it does, though it is a bit odd that neither Susan nor Justin speaks up before panel three.

My excuse for Justin is simply that he believe Susan would rather fight her own battles (and he'd be right), but I actually cut exposition that explains Susan's reason. Given the current atmosphere in Moperville, summoning mystic hammers out of thin air is probably a bad idea, so I had at one point planned on Susan expressing that point along with her intent to resist hammering anyone.