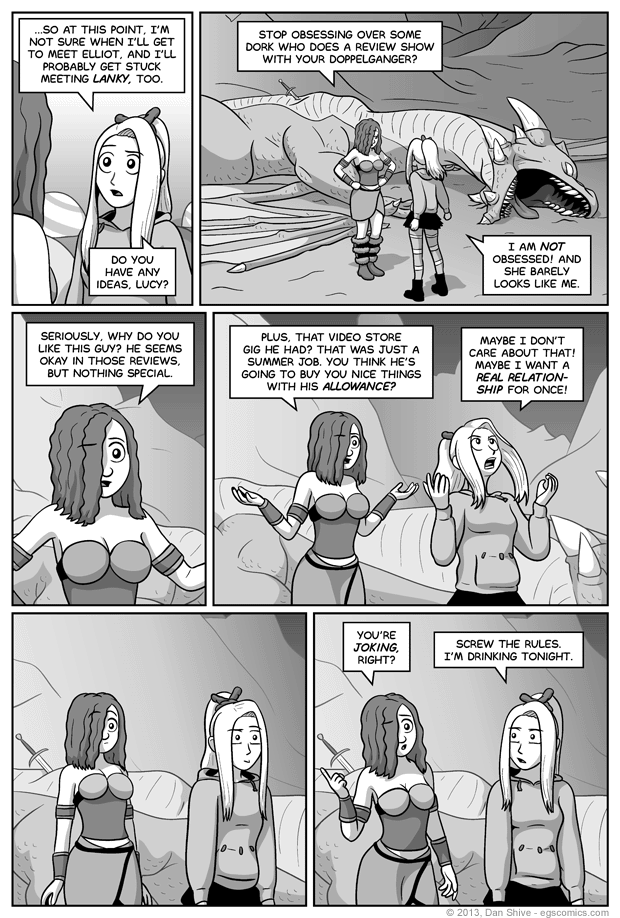 More comics need to have random dead dragons in the background that go unacknowledged.

In case it wasn't obvious (you know, because of her hair), Diane's back on the interwebs. I thought of giving Lucy a more Xena-esque avatar, but really, I don't know a lot about Xena, and I wanted the dragon. I can only assume Xena fought a dragon or something dragon-like at some point, but to heck with assumptions. Lucy's just fine in generic fantasy fighter garb (keyword being "fantasy").

That, and it would have hurt my brain to have Lucy dressed as a character who was played by Lucy Lawless.

We haven't seen Lucy in a long time, and a big reason for that is, for the time being at least, Lucy mostly exists as a friend for Diane to talk to with more contrariness and backbone than Rhoda while still having a lot in common with Diane. There simply hasn't been much point to her showing up before now.

Lucy has the distinction of being the tallest female character in the comic so far, taking the record away from Susan (who was possibly cheating with magic anyway). She's around 5' 10", which I suppose isn't that extreme and won't keep certain people from telling me that I need taller women in the comic.

Speaking of heights and such, I forgot to mention how much smaller than normal Nanase and Ellen were in the last panel of the previous comic. They were both at 60% scale, meaning they were both around a little over three feet tall.