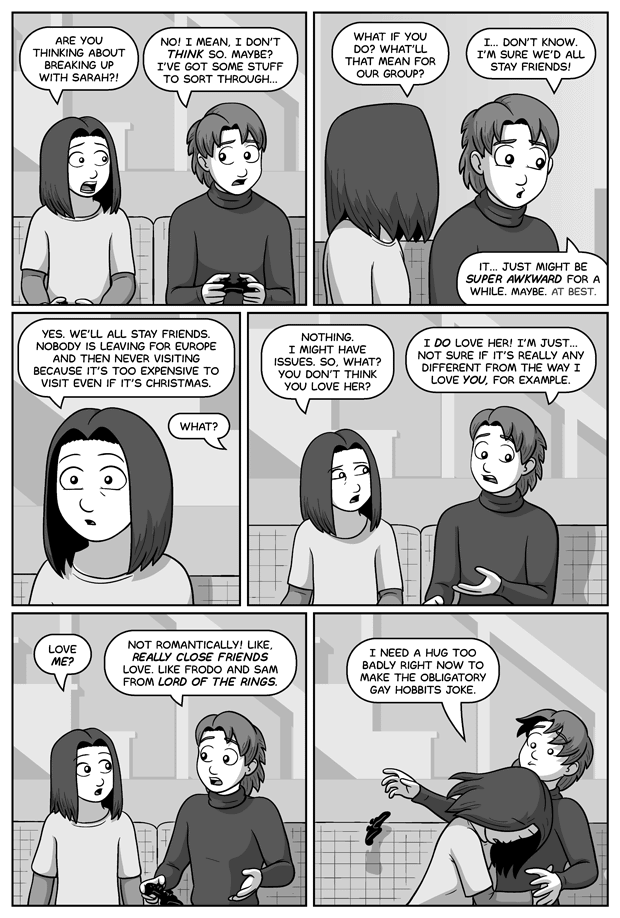 I might have mentioned in a previous comic commentary being contractually obligated to give shippers hope? That said, Elliot, if you don't hug him back... *GLARE*

I am personally of the opinion that Sam and Frodo from Lord of The Rings were not romantically interested in each other, and I prefer the idea that they weren't. I'm fond of Sam as a character motivated purely by friendship, loyalty, and a sense of duty. I'm perfectly fine with the idea of two adventurous male hobbits falling in wuv, but that's not my interpretation of Sam.

It's a rare case where I actually feel some irrational annoyance over people shipping Sam with Frodo because of my fondness of my own interpretation of their friendship. I really shouldn't care, but part of me is all like "no my interpretation is the bestest of all the interpretations...!"

Of course, that's specific to Sam's character and his motivations. The idea of Frodo having a thing for Sam is something I'm totally indifferent about and, frankly, it wouldn't surprise me. I mean, come on! He's SAM! Who wouldn't like Sam? Honestly.

It's probably worth noting that my opinions on the matter are based entirely on the movies. I've yet to make it through the books, and that's even attempting to get through them by way of audiobook. It was going pretty well until Tom Bombadil showed up, and... Argh. I made it through his first scene, and I thought they were done with him, but then he showed up again, and... Argh. I think I stopped in the middle of a scene with him. I've been hesitant to start listening again.