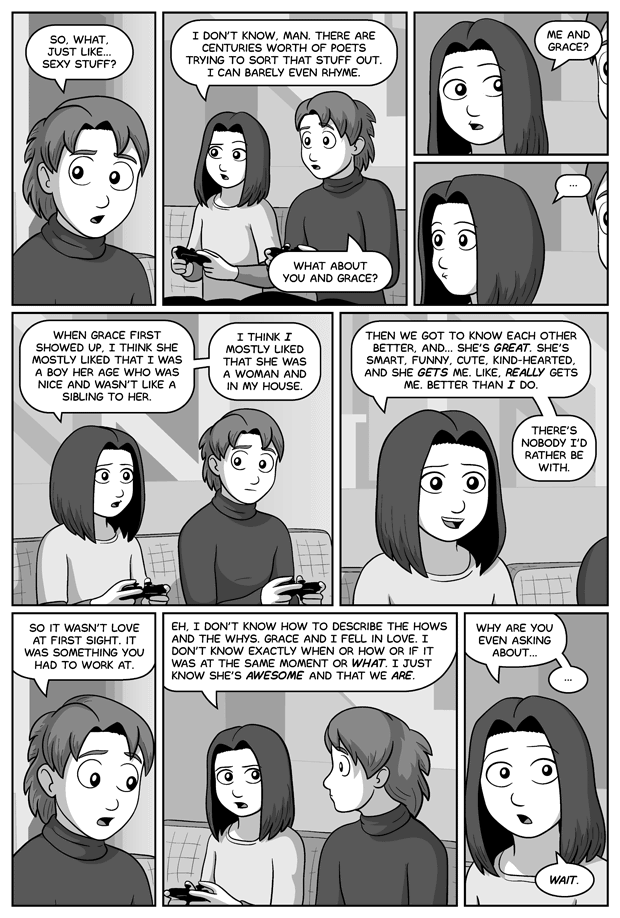 Oh snap. Has Tedd figured out what feels lurk in the heart of Elliot? Wait, I should probably let the next comic answer that. Never mind.

I grew up watching a lot of sitcoms. That's pretty much all I cared about that was on television in the late afternoon and evening, and over time, I started to get annoyed by recurring elements such as "will they / won't they" plots. At the time of the first comic, I was thinking stuff like "I'm not gonna do anything like that. I'm going to cut right to the chase and BAM! Characters will be together."

I have since, um... Obviously changed my position on that matter. Such scenarios can become exhausting, but there's such a thing as getting characters together too quickly ("hey, it's season two! Let's get these two together now! It's not like we'll last ten seasons"), and then there are couples who I feel are best left never getting together prior to the finale, if at all.

Bringing this back to my own comic, I feel I prooooobably should have made Tedd and Grace getting together more of a gradual thing. It's no wonder Tedd can't describe the hows and the whys; he was basically blindsided by a spontaneous relationship. They're together now and I fear too much for my own personal safety to attempt a contrived means of making them have to re-get together, but yeah. Hindsight. 20/20. Whatevs. Moving forward.