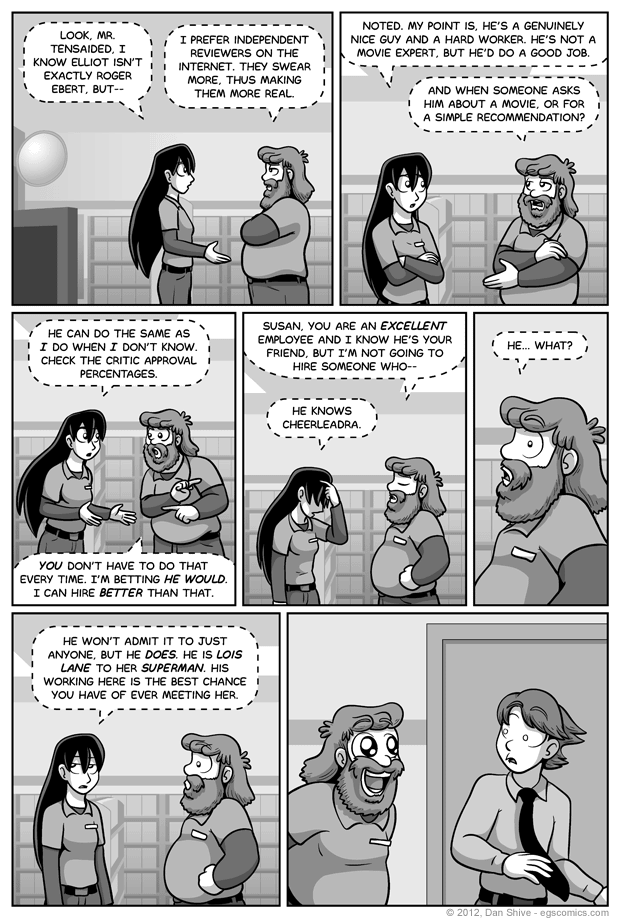 And so it is revealed that the first comic of this storyline was epic foreshadowing, much like a trampoline in the background in a movie. You just know someone's gonna jump on that trampoline before the movie's over, and if they don't, you demand your money back.

In panel three of this comic, Susan's basically suggesting looking at a score similar to, or the same as, that provided by Rotten Tomatoes, which I tend to hear referenced more than the stars or thumbs of individual critics these days. I tend to favor the reviews of obscure critics on the internet who would be unlikely to be commonly referenced anyway, though I don't like them for the same reason as Mr. Tensaided.

The tomato rating system makes a sort of sense. If most critics and the general audience tracked liked a movie, it's fresh. If not, it's rotten. Either way, however, it's still in reference to tomatoes, which brings to mind tomatoes being thrown at the screen. This seems to imply that, either way, every movie is going to have tomatoes thrown at them. I would think the goal would be the removal of tomatoes altogether, but then the metaphor starts to get more complex and less succinct.