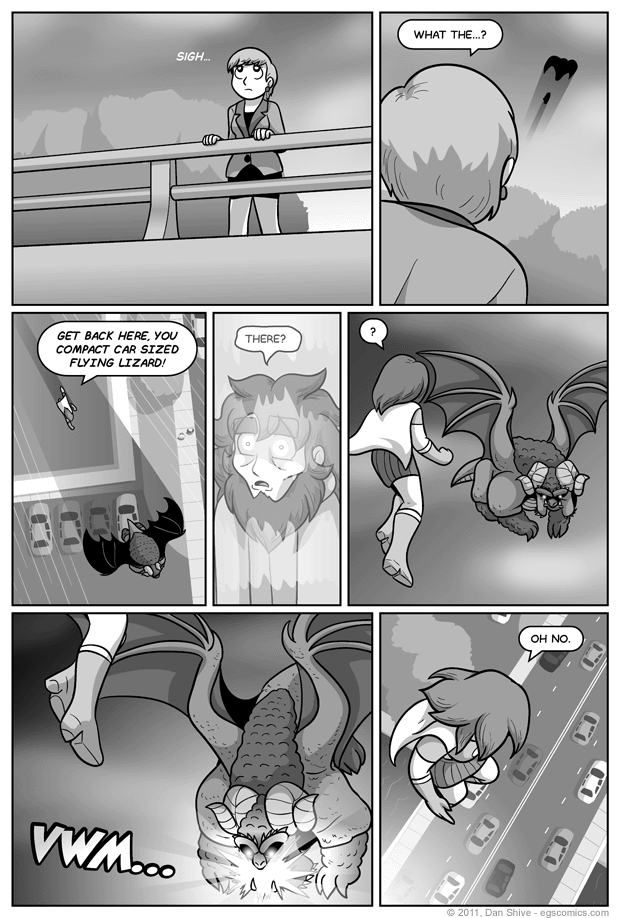 STORY COMICS-- Wait, do I really need to keep mentioning this in the commentary? New story comics every weekday, sketchbooks on Saturdays, yadda yadda yadda...

Darn it, why'd I have to start having five story comics a week now? This could've been a Friday comic!

Of course, that's pretty much why I felt the increased update rate needed to start with these comics. I could have put it off forever and ever, but action sequences call for a fair amount of panel real estate and generally progress things less on a per-page basis.

Consider the previous action sequence. It was about 9 pages long, which would be three weeks with a 3-per-week update. I don't think it's spoiling anything to say this sequence is more complicated than that, and I'd like to finish it before we have to fight mutated lobster ants in 2012.

I've gotten varying answers to my question regarding Latin from a couple comics back, but at least one of them said "Taurcanis Draco" works and I like the way it sounds, so I'm probably sticking to it. Someone suggested "Tauriscanis Draco" would be more accurate, but I feel it's too many syllables.

"Taurcanis" also sounds like one word to me, whereas "Tauriscanis" sounds like "Tauris Canis". Much less snappy. I WANT SNAP, DAMMIT! *drinks a Snapple* SNAP! *eats a Slim Jim* SNAAAAAAAP! *snaps*