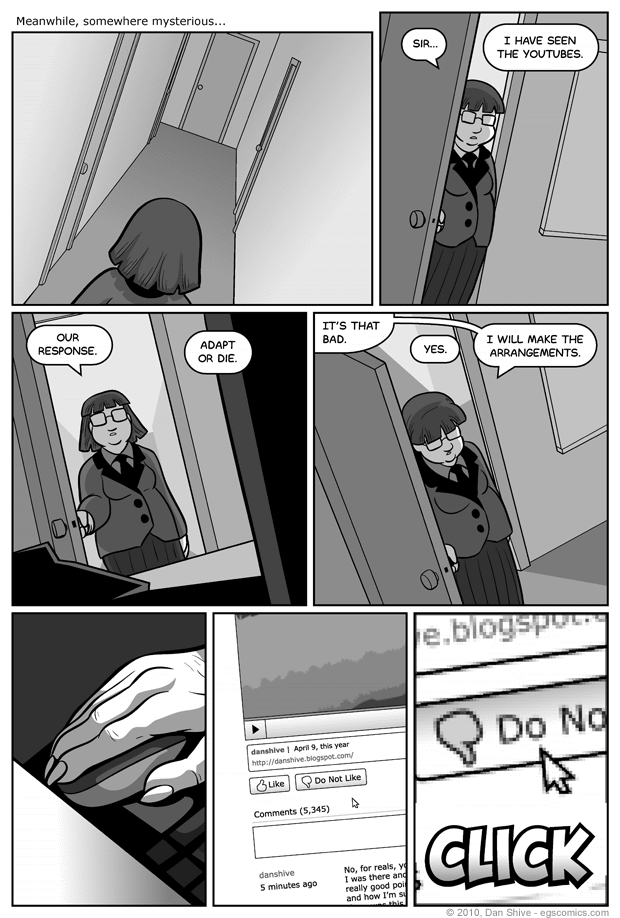 Posted October 25, 2010 at 1:00 am
I apologize to anyone who was unable to handle the dramatic dramaticness of this dramatic comic's drama. There are times when I simply cannot help but be this epic.

This comic was deceptively complicated to make, but then the hardest parts of it were simply figuring out the composition and what to show and not show. The actual drawings were pretty simple, but I've got preliminary sketches with poses of the mostly off-panel individual, and in the end I decided to only mysteriously show a mysterious hand on a mysterious-by-extension mouse.

One might have to squint to see it, but there are a lot of minor details in the 6th panel. For one, it's reiterated that the date is April 9th of the current year (whatever that may be HA!), and that the video this person is looking at is evidently the one posted by my doppelganger. Part of the reason for that is because I wanted the "YouTubes" line, but didn't want to have issues with any genuine YouTube users. I have a seldom-used account and its pretty easy to get my own permission, so... yeah. Playing it safe.

Anyone who is familiar with the Youtubes will note that the layout shown isn't exactly the same, but there are several reasons for that. For one, that's not necessarily YouTube at all. Much like Google, Band-Aids, and other brand names, people sometimes use the name for anything that's similar. I'd like to think doppelganger me wouldn't do that, but he also seems a bit more arrogant than me and still wears a molded bowler cap, so who knows.

For two, no website layout is forever constant, and for three, I wanted it to be absolutely clear what he was clicking on. I think the thumbs down symbol is pretty universally clear, but I didn't want to take for granted that everyone would know that's what that scribble of mine was supposed to be.