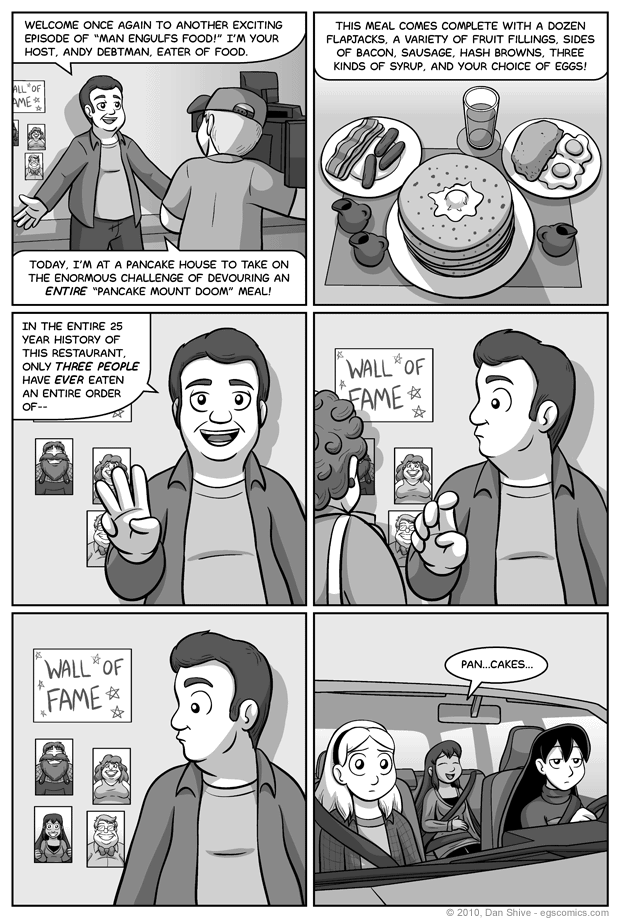 Posted May 12, 2010 at 1:00 am
Bad habit #324: Spending way too much time on images that will subsequently be cropped and shrunk down to 37x55 pixels once the comic is posted online. You better believe a blown up version of the wall of fame will be Thursday's sketchbook entry. ...And that I'll be editing this paragraph later seeing as it isn't Thursday yet.

On the plus side, should the fact that there's a photo of Grace on the wall of a pancake place where a TV show episode was filmed ever come up again, the high-res version is already drawn. Hooray!

It's interesting to note that I wound up not using any of the preliminary designs drawn in the previous sketchbook entry for the hall of fame. Well, Kevin thought it was interesting, anyway. If you disagree, take it up with him.

In case it wasn't obvious, this comic parodies a TV show called Man Vs Food, a show where a man named Adam Richman (you see what I did there?) takes extravagantly huge restaurant meals as a challenge and swallows them whole (editors note: chewing may or may not be involved).

The intention in this comic was to present an absurdly large meal that wasn't too ridiculous while still being big enough to be outside the realm of likely reality. So, of course, when I checked out the show's website after completing the comic, the first image I saw was of him about to chow down on what appeared to be at least a dozen pancakes. I don't know if he ever actually ate that stack and I didn't see any sides, but still. Maybe I should have added more sausages? Everyone likes sausages (especially vegetarians).

Anyway, Man Vs Food is a strangely engaging show. Part of me feels like I should be opposed to people eating large meals just for the sake of eating large meals, but then another part of me tells the first part to stop being a curmudgeon and enjoy the show. I have no real motivation for rooting for the host to succeed in eating an absurdly large meal, but I find I want him to do well anyway. Maybe I just instinctively want the protagonists of TV shows to be successful in their endeavors. In any case, it is a fun show.