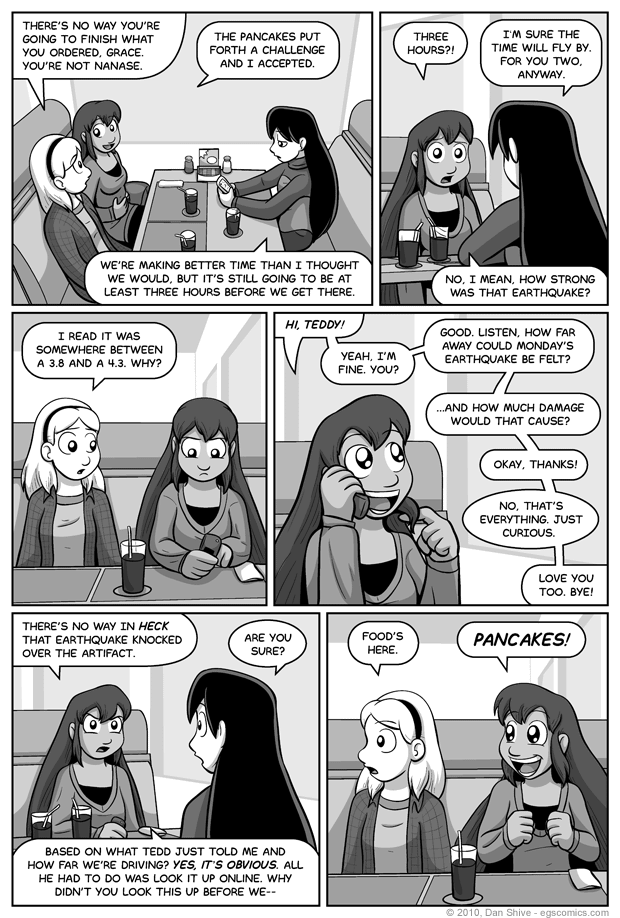 Posted May 10, 2010 at 1:00 am
Give yourself a cookie if you saw this flaw in Susan's logic coming, If you did not see this coming, feel free to have a cookie anyway. Given that you're the one supplying your own cookies, there's little I can do to stop you.

While this storyline has been in my mind for a long time, the earthquake angle was a relatively recent addition. I mentioned in a previous comic's commentary that there was a small earthquake close enough to where I live for me to feel it, which inspired me to include one in this storyline.

The main reason I decided to incorporate a minor earthquake was, prior to its inclusion, Susan had nothing to go on regarding what had happened beyond her prior knowledge of the artifact. I felt she should have at least some seemingly sound theory as to what happened and that it should suggest something relatively benign being responsible.

Which isn't a guarantee that the earthquake had nothing to do with it. Just because it was a relatively late addition doesn't mean only one aspect of the story was changed by it.

Is Grace correct in assuming it had nothing to do with it? Will she be able to finish whatever she ordered? Will Sarah regain the hots for Elliot? Does this mean Susan didn't do well in Earth Science, much as I didn't on account of the class boring me into a coma and the teacher who did less teaching and more loafing about while we sat around with open books filling out study guides (no I'm not still bitter)?

Find out eventually in future installments of the Adventures Of Wacky Magical And Not-So Magical Teenagers! (aka El Goonish Shive)