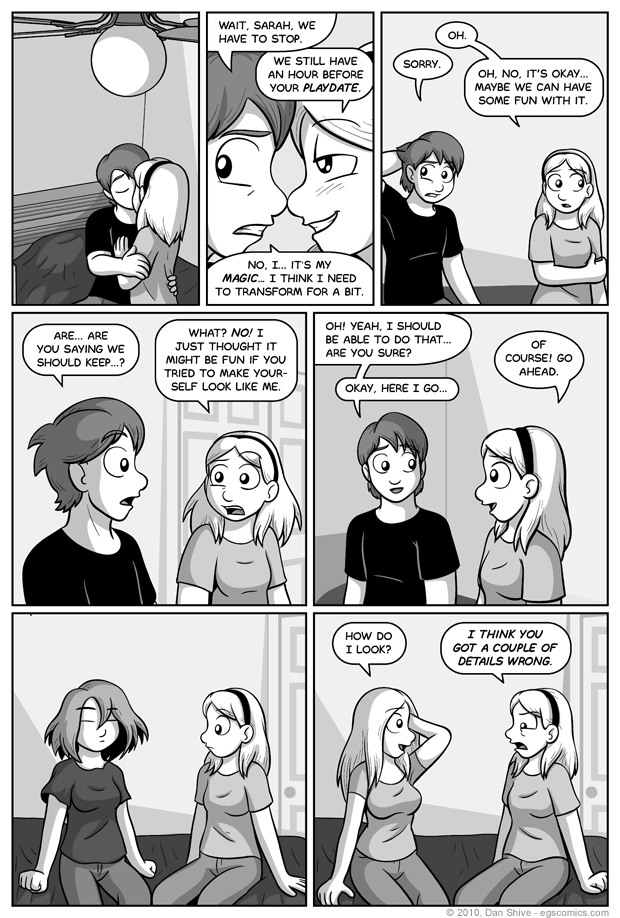 A trimmed down version of this comic was originally going to be a standalone EGS:NP gag strip with no impact whatsoever on the main storyline, but like so many aspects of this storyline, one idea led to another and suddenly it had to become an incident in canon and specifically in this storyline.

I was somewhat indecisive about what days of the week this storyline would take place during, and actually didn't consider the potential continuity confusioncaused by Elliot's "playdate" with Noah when I settled on Tuesday for these scenes. As such, Sarah's flirtatious line in panel two of this comic gets to function as a means to let everyone know I didn't (entirely) forget Elliot's Tuesday plans while confusing everyone who did forgot about them.

Granted, it's already afternoon in this comic, so it's a bit odd they didn't go earlier, but what the heck, right? I know my friends in high school would commonly sleep in and that we'd usually play basketball in the late afternoon, so I'm going to claim realism here in this comic about a guy turning into a large-chested variation of his cute girlfriend.

And now, let us close on this commentary with some mood music for the first two panels as provided by Mr. Barry White.