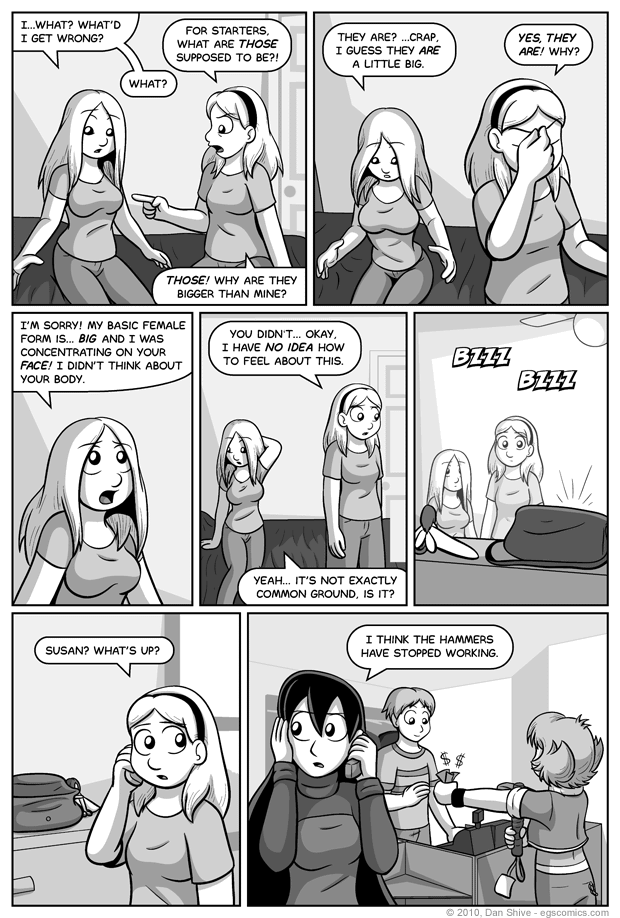 Posted April 23, 2010 at 1:00 am
It's pretty safe to say that Elliot wasn't trying to insult Sarah here. He's just absent-minded and not too bright. He's actually intelligent, but he doesn't really focus enough most of the time for it to matter.

I noticed in response to the last comic the argument that Sarah should take this as a compliment, the rationale being that Elliot is so in wuv with Sarah that the form he assumed was how he saw her, i.e. he views her in an idealized way. I can sort of see the logic, but it still sounds like saying "this is you, but hotter" or "this is how I pretend you look". That's... no. I cannot see either of those being complimentary.

If I had a lady friend who was a shapeshifter, I might ask her to show me what I'd look like as an idealized (in my opinion) version of myself, and then that would be cool. If I asked her to try to look like me as I am now and then she went for the idealized instead, that wouldn't be cool.

What? Of course I've thought about it. I'm bound to have to deal with this issue at some point.

...Actually, you know what? I really do have to deal with this sort of thing, and I'm the shapeshifter. Metaphorically, anyway. I'm a cartoonist, and it's common for people to want me to draw them. How detailed do I get? Do I draw them "warts and all" or be cosmetically selective? It's ultimately a matter of who I'm drawing and what they'd prefer, but it's something I genuinely have to consider and it can make for awkward social situations.

It may sound superficial, and it is, but I know first hand about the whole "things I'd rather not be in or changed for the drawing" thing. For example, the fun, embarrassing fact that I have a bald spot on the back of my head. I do not like this bald spot. If someone were to draw a cartoon of me, I'd rather not be reminded of that bald spot when looking at it, and would much prefer they draw hair there.

It's silly and inaccurate, but I'm human, flawed, and feel bad every time I see that stupid bald spot. As such, if someone would prefer my drawing of them include an inaccuracy, they get to have that inaccuracy, darn it. It might be healthier if we were all perfectly happy with our looks, but we are imperfect beings. I encourage everyone to be as happy as they can be with their looks and to not do harmful things to alter their appearance, but I'm sure we all have things we wish were different about ourselves.

...Wow, that got really personal and serious there. Already used pie.... um... Dan In The MUD! Yeah, that works.