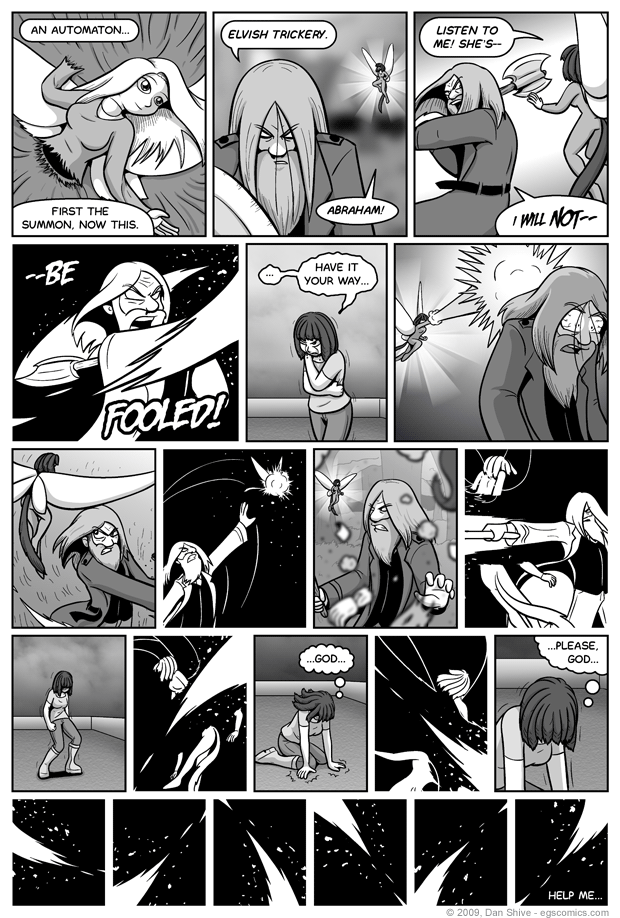 Okay, so only eleven of those "deaths" are on this page, but it's twelve total counting the previous page, darn it!

This page was so complicated and had such a specific intention to it that I prepared the layout and template for it weeks in advance. I thought I was SO prepared. Then, when it finally came time to work on it, I found there was something bugging me about it. It took a little while for me to realize what it was.

In the original script, it wasn't clear enough what was going on in Abraham's head and why he had no trepidations about violently destroying fairy after fairy. To clarify, there was no dialogue from him whatsoever. This was one of the issues I realized I needed to address, not because I'm worried about Abe being presented in a negative light, but because it would be out of character for him to behave in such a way without a hastily assumed rationalization.

His assumption that Raven is still trying to intervene is somewhat crucial to his brutality and unwillingness to listen. Of course, if he was thinking straight, he'd remember that he had sensed a number of unusual beings within the school, and that it's logical to conclude that these fairies might have nothing to do with Raven. Abe, however, is not quite thinking with a full deck at the moment, and is unlikely to start while his rage still burns.

Another significant change was the third row of panels. They were originally going to be less fluid, as in one attack wasn't going to flow into the other. Having Nanase immediately returning and struck down as the remains of the previous fairy are still falling, however, shows how determined Nanase is and how deadly and quick Abe is.

Incidentally, those small objects on the ground to the right of Abe in the first panel of row three are remains of the doll that was destroyed in panel four.

As far as I can recall, this page is in third place for most panels in a single update. Second place is the end of Grace's Birthday Party, and first place is Justin Getting Transformed