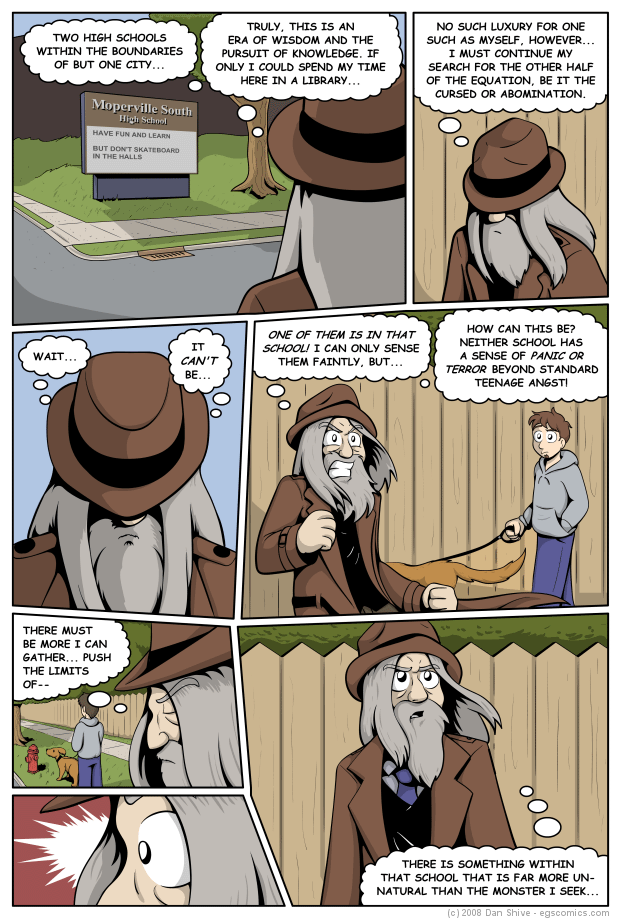 Posted November 6, 2008 at 1:00 am
For anyone having trouble reading the sign: "Moperville South High School - Have fun and learn. But don't skateboard in the halls."

I didn’t intend this, but I think he looks a little like [[wp:Tory Belleci]] of [[wp:Mythbusters]]. I suspect this is mostly due to his hair color and facial hair. That’s fine with me, because Tory is awesome. He’s a smart guy with guts, and I can’t believe I used to think of him as "that generic guy on the build team." The dog, meanwhile, was modeled after the one featured in [[wp:Fable 2]]. Based on its fur color, I’m guessing his owner is a pretty good guy, but not a saint.

*GASP* Shadows! That’s right, shadows. There are those among you who will look upon these shadows with dispair, for you will be concerned that I’ve made my production process 300 times more complicated and that it must take me that much longer to add them. That would indeed be true if I was using my old method of shading.

The old method basically involved me carefully drawing out guidelines of where to add shadow, then using a fill tool to fill areas with darker versions of the respective colors. Now I’m just drawing with a brush tool on a separate layer with black set at a transparency and using the fill tool on larger blocks of shadow. It doesn’t take that long to do, and it actually makes coloring easier. Adding shadows makes it simple to add contrast, meaning similar colors are less of an issue and there’s less need to mess with gradients. I think this is the first comic in a long time to not have a single gradient in it.

The reason I went mad and added shadows is because the flat colors were driving me crazy. The feel I was getting from them was simply not what I wanted, particularly given some of the upcoming scenes. While EGS is primarily comedic, there are some very serious moments on the horizon, and they simply will not work without some shadow effects.

In the interest of comedy and keeping things light hearted where possible, however, I intend to keep the shadows mostly subtle. The lighting is somewhat stronger in this scene due to it being outside and the sun up high and to the West, so there are more shadows being cast. Most scenes are more well lit and indoors, so while the shadows might be as dark as here, there should be less of them.