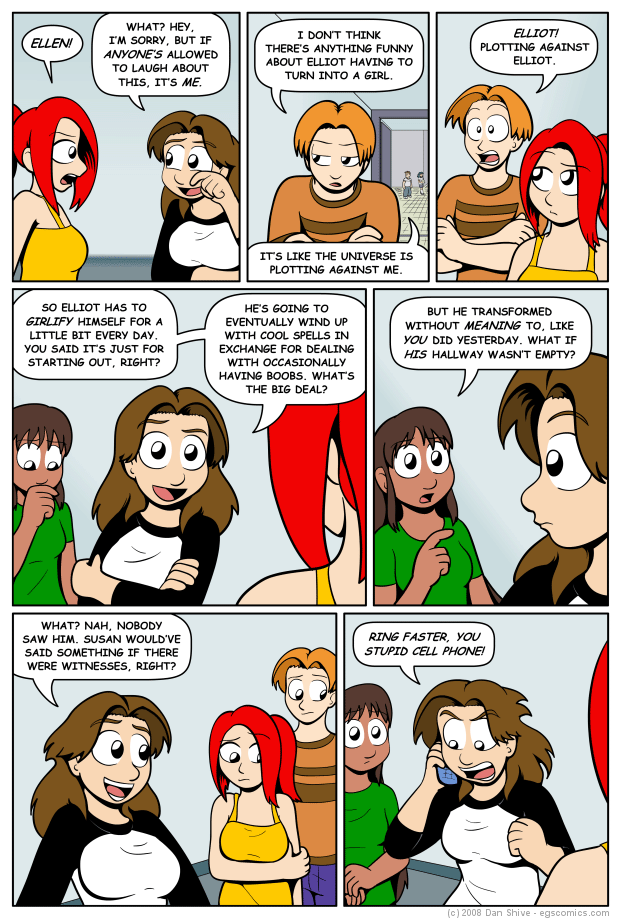 Posted November 4, 2008 at 1:00 am
Once again, Grace finds a way to make a statement in an odd way. My favorite of these remains "corn that isn't corn" in reference to the term "corny."

I think it's perfectly understandable for Ellen to find Elliot's situation amusing. Given her own situation, I'd actually find it understandable if she was a bit more malicious about it, too. As things stand, she considers it acceptable to find it amusing in part because it's not something that Elliot will be stuck with forever, and that's a consideration many people in her place wouldn't make.

There was a significant gap in production between the previous comic and this one for several reasons, so if there appears to be a bit of a jump in the artwork, that's because there is. In addition to rethinking how I draw some of the characters hair and heavier line thickness, this was the first comic in a long time that I sketched off of the computer on actual paper.

While I believe sketching off the computer results in mostly better drawings, I made a mistake with this one in that I sketched it at 100% print size. It is normally wise to draw larger than the final print version, but I figured I could get away with not doing so and use less paper given that I'd be going over it on the computer anyway.

Unfortunately, this resulted in lower quality sketches, which made digital inking more difficult and even required some additional computer sketching just to make sense of what I'd drawn. The first panel, Justin's arms in panel three and Ellen's left hand in panel four all had to be resketched digitally prior to inking, as did pretty much all of Justin in panel six.

The comics to follow this one are being sketched at a larger size and are much cleaner while still being faster and better looking than sketched on the computer. Many background elements will likely remain 95% digital with that 5% being the perspective established in pencil so the characters don't seem out of place.