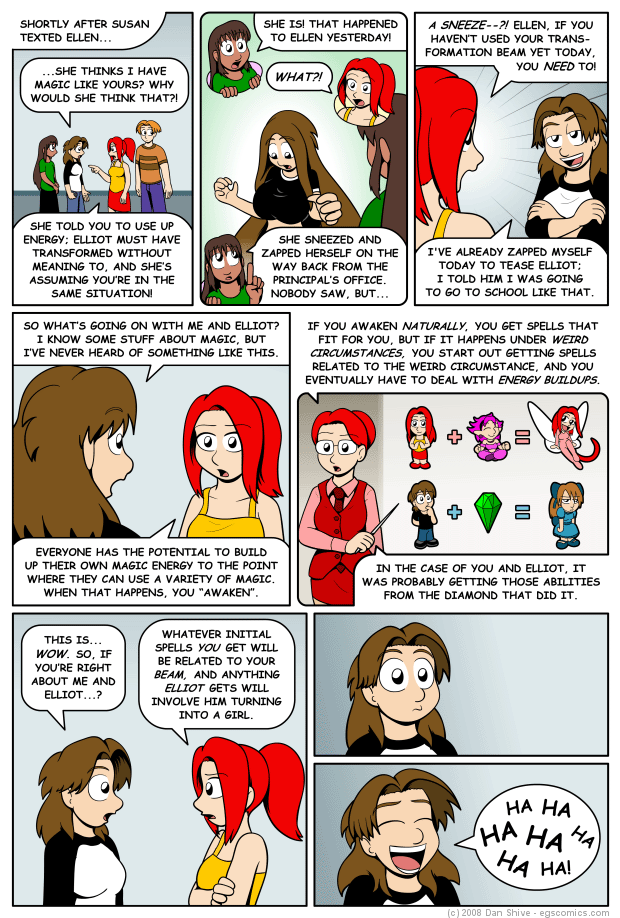 Ok, according to the [[wp:Rule_of_three_(writing)|rule of three]], this is the last of the pause with a particular look on Elliot or Ellen's face followed by something else... for now, anyway. This also means we're not likely to hear a "this is complicated enough as it is" joke for a while after the last comic.

Speaking of the rule of three, one problem I run into is that I generally wind up with four characters per scene during school. This can work, of course, but there are times when characters wind up not getting to do much. Justin, for example, is little more than a prop in this page there for continuity's sake. He'll get to say stuff before this scene is over (unless I do yet another rewrite), but for this page, my apologies to Justin fans.

Grace doesn't have much to do on this page either, as Ellen didn't really need her to say she sneezed and zapped herself, but I like it better with Grace blurting it out. Also, I like that she has no respect for the fourth wall. Characters aren't supposed to interact with the ellipses they're popping out of during such visuals, but Grace is treating it as though she's popping out of a hole in time and space, and she points at the flashback! Breaking the fourth wall would be unforgivable if she verbally acknowledged it, but I guess she can be forgiven while within a panel with rounded borders.

I don't like that there isn't much of a background beyond a burst and gradient in panel three, but it's a casualty of time VS reward, and the background there would have been much to complicated for too little reward to justify it. What I really should have done was a different angle, but that's a realization that came too little, too late. I also think that Ellen looks a little weird in this panel... wow, I'm really criticizing myself in this commentary, aren't I?

One thing I DO like about panel three is the explanation as to why she zapped herself already today. For one thing, it's explanation that isn't in and of itself dirty, as opposed to the sort of joke I might've done with Tedd in the same situation. It's also left to the imagination, which means the exact circumstances and how it went are left up to the reader.

Ellen zapping herself to tease Elliot also establishes something that I don't think has really been brought up in this arc yet, which is the simple fact that Ellen loves to poke fun at, and generally mess with, Elliot. While she does confide in and care for Elliot, she gets immense satisfaction from mocking him, and absolutely loves it when Elliot is a girl and feeling awkward. Ellen would love a picture of female Elliot in a dress as depicted in panel five... which, I would hope, explains her laughter in the last panel.

Speaking of panel five, well... I love that panel. I didn't draw Nanase's left hand because I knew it would just get covered up, but I might have to finish that drawing so I can make a wallpaper out of it. At the very least, I will be making a wallpaper of that panel sans "Hot for Teacher" Nanase with just the chibi diagram.

Panel five is the sort of fantasy sequence I love to do in EGS. It doesn't interrupt the dialogue and the characters don't acknowledge it, but it's a fun visual that shakes things up during a long dialogue sequence. It reminds me of when [[2003-07-10|Nanase was describing her web of lies]] back during Night Out, which is also a sequence I love. I need to find more places to put in stuff like this. I was deprived of doing so for the last several weeks of comics, so I'm looking forward to it being more of an option.

Nanase's color palette was adjusted as of this page to make her skin darker and her hair lighter. The hues are the same, but I felt it was simply wrong for Nanase's skin to be so light, and the hair just seemed overly dark to me. I believe I made Nanase's skin light because she's related to Tedd, but that wasn't the right thing to do as the official reason Tedd has light skin is the same reason Susan has light skin: he doesn't get outside much. He's got the "pale nerd" thing going for him. Nanase's look isn't meant to imply anything like that, so I consider the palette adjustment more of a correction than an adjustment.

Incidentally, YES, that least paragraph does suggest that alternate versions of Tedd and Susan should logically have slightly darker skin if they go outside more. Should Susan ever meet one of her alternates, it will be tempting to give them a significant tan... though I probably won't, as I doubt even Susan's alternates are the tanning types regardless of whether they get outside more.