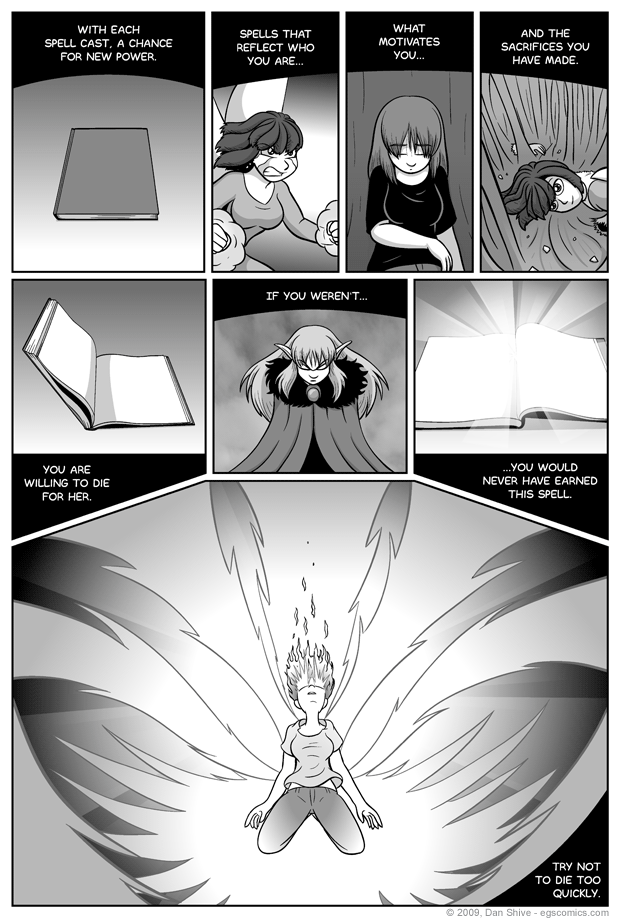 I expect highly polarized reactions to this and upcoming comics given Nanase suddenly getting a new spell. To say this is coming completely out of nowhere, however, simply isn't true. Nanase's story has effectively been building to this moment since this page.

This, like the previous comic, originally had much less text. To the point, it had none (and a slightly different layout). There was at least one advantage to this, but it was in every other way more confusing and less ominous. I felt it needed, at the very least, that final note at the end.

One thing I liked about the no-text version was that Nanase had just asked for God's help in the previous comic. Chaos's narration makes it less likely people will jump to the conclusion that Nanase could be getting this spell as a result of divine intervention, and I'm sorry to see that go. One could still reach that conclusion, of course, but I see it being less likely with this final version.

Speaking of Chaos, it's probably clear by now that while she is a fan of chaos and unpredictability, Chaos herself is anything but chaotic. She may pursue chaos, but she's the least likely character in EGS to do anything truly chaotic.

In other words, do NOT challenge her to a game of chess ^^;