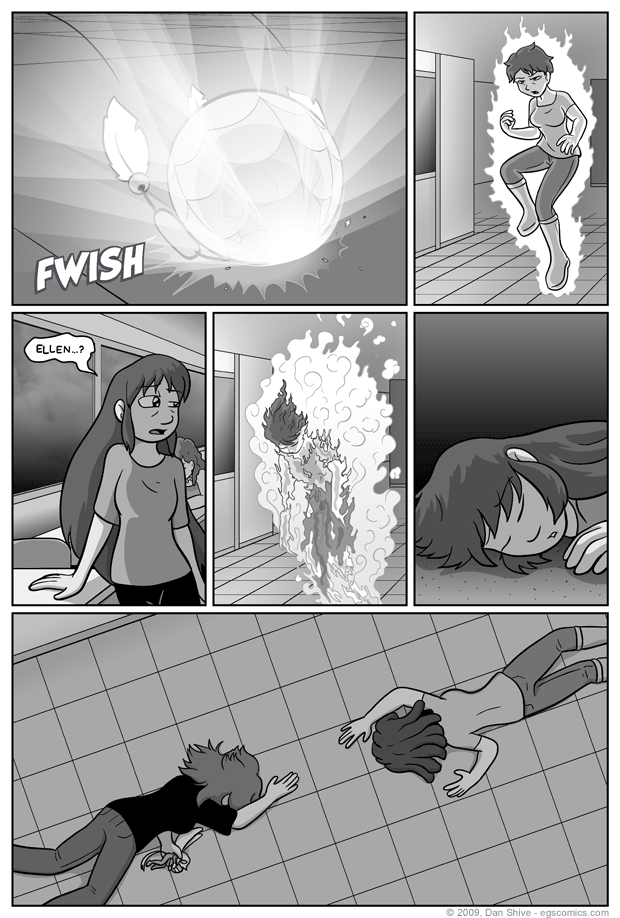 This is the 100th page of the Sister II story arc, assuming you don't count the cover (which I don't, so there). I find it fitting.

"Why didn't Abe use this earlier?" That's what you're wondering, right? I've got the crazy psychic skills!

At least one reason will be heavily hinted at in the next page, if not outright stated. I'm trying to avoid diving into exposition during this moment, but we'll see how well I do. I will definitely be deviating from the script on that one.

I will just go ahead and point out, however, that there is at least one universal reason why someone who considers themselves to be on the side of good would hesitate to use something that forces people within an area to suddenly sleep: it's dangerous. Someone's on the stairs, driving a car... you get the picture.

The orb's design was inspired by Dreamcatchers, as many have already guessed. I had the grenade like sleep orb planned for a while, but the design was REALLY last minute. I wanted something associated with sleep, but not too overt. I didn't want to put a bunch of Z's on it, for example.

So what's Abe, an English wizard doing with a magic grenade designed after an Ojibwa dream catcher? Darned if I know. Dude's traveled in his day and met other dudes who have traveled. Get off my back! Sheesh.

I have more to say about it, but it's occurred to me that it's a minor spoiler regarding parts the rest of the arc, so I'm leaving it for the last paragraph. Scroll past the "Minor Spoiler Below" warning towards the end of this commentary and read at your own (minor) peril. I'm gonna talk about a couple other things before then, though.

The explosion effect for the sleep spell grenade is essentially a series of gradients expanding from each individual section of "web" on the ball. I like the results.

The characters going to sleep wound up creepier than I expected. Grace, confused and losing consciousness... I don't know, it's disturbing. It makes me want to give her a hug (once she wakes up, of course). Fox's vanishing is also creepier than I originally figured it would be. I pictured her sort of fading away into a vanishing cloud, but it was much less disturbing as I originally pictured it. Make a note: those who are easily creeped out would do well to dismiss summons quickly rather than gradually.

Now that the design of the "sleep spell grenade" is based off of Dreamcatchers, I've reached the conclusion that all dreams had as a result of it will be nightmare free. Not only does it make a certain sense given the design, but it's a sleep weapon used by a self-proclaimed "good guy". Giving his targets good dreams seems like the sort of compromise this guy would make to justify his actions.