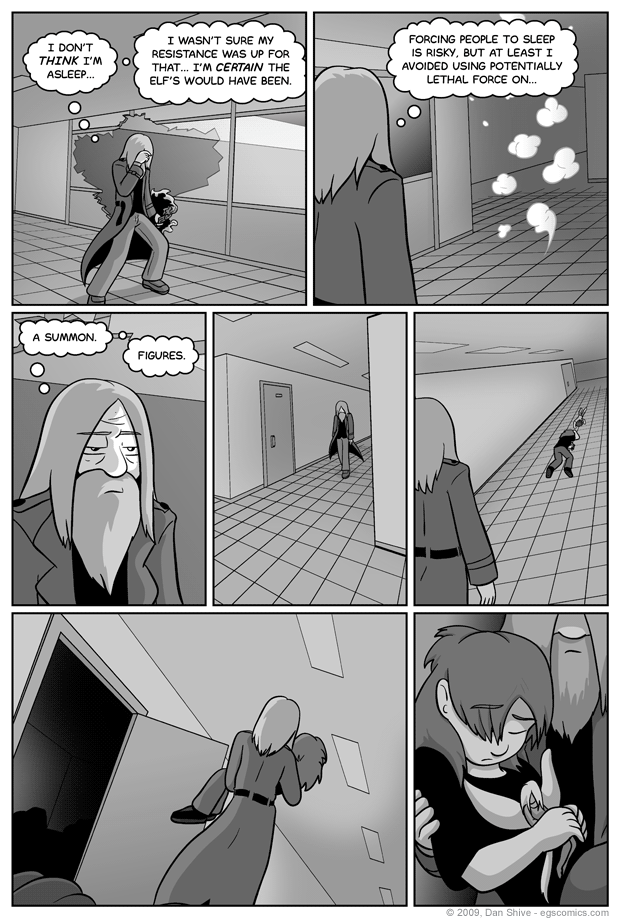 This comic was designed to have a somewhat disorienting effect to it due to odd angles in the perspective. The intention was to reflect both the eeriness of Abe getting to Ellen, and his own disorientation due to the sleep grenade.

That said, reasons for not using the grenade earlier ahoy! This was just stated in the comic above, but just to be extra clear:

1. Abe wasn't certain he himself would stay awake.

2. He was certain Raven would be able to stay awake.

3. Forcing people into sudden sleep is dangerous, and Abe considers himself to be one of the good guys.

4. He used it now because he didn't realize Fox was a summon and he didn't want to risk killing her. She was a formidable enough force that countering her with anything effective would have carried that risk.

Granted, one may not think those were good enough reasons. That doesn't really matter, though. What matters is whether Abe would consider these good reasons, and the answer is yes. Yes he would.

I did happen to notice someone's comment that Raven's barriers would have contained the effects of the sleep grenade. I don't know what this is based on, but for the record, it wouldn't have.

Raven's barriers would stop some magic effects directly hitting the barriers themselves, but they would've been pretty useless against the sleep grenade. They were primarily to keep intruders from physically getting through doors and selectively blocking off corridors as a means of containment (which is why there were barriers in parts of that hallway in spite of the lack of doors).

As Tedd would quickly warn us, be careful with those conclusion jumps! Assumptions about one magic thing is bad enough, but two? That's how horror movies get started, folks.