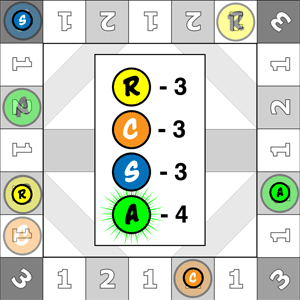 "Tall" Catalina isn't THAT apparent while sitting, but I'll be sure to show her standing player piece before she changes again.

- Golden Cheerleader effect - I didn't want to devote a lot of space to a player being chosen at random and drawing a card, but I did want to acknowledge it. Granted, I could have done something with Ashley getting the card again, but nothing I came up wih felt good enough to justify devoting a comic to it.

Kid Susan has an adhesive bandage on her knee because I've seen that sort of "this lets you know this kid runs around playing and hurts the occasional knee or elbow" detail in enough cartoons that I figure Hanma would consider it essential to complete the image. It's safe to assume that it's just there as decoration, and there is no actual scrape or cut under there.