EDIT - People found the first version of this comic confusing, so I made some changes. Firstly, added some thought exposition to the first panel, and increased emphasis on Susan being encouraged by the realism of the outfit. Secondly, adjusted the shadows on Susan a bit so people would hopefully stop asking "is she still a kid" (the answer is an emphatic "no", by the way).

Also, she says "jail" because she's annoyed, and it's a police costume. 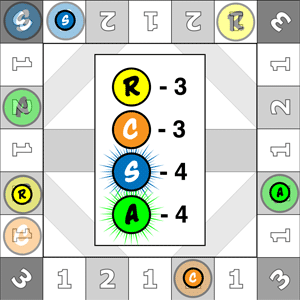 Firstly, holy carp. I definitely made a mistake while playtesting and literally, WHILE WRITING THIS COMMENTARY, only just caught it.

I've already decided how I'm going to handle this mistake (hint: It involves the word "playtesting"), but the error is this: Kid is a clothing / physical card, and Skunk is an animal card. Police is a clothing card, and Bunny an animal card. Given that it's a one-space, she could have bought the space with Bunny by itself, but Susan didn't want to be a Kid either, so she undid both.

Thing is, a two-type shouldn't have been able to be replaced by a single clothing card, but unless I missed something in my photo record of the game, that's exactly what I did.

But yeah, I know how I'm going to address it. I'm just mildly shocked that I made the mistake in the first place. Not super shocked? I was playtesting late at night, after all, and keeping track of four players. I just wish I caught it earlier so I didn't have to address it in a second comic.

Unless it's a good comic... The BEST comic... I WILL BUILD IT FROM THE FINEST PANELS, POWERED BY DUCK FLIGHT...!

As mentioned two commentaries previous, kid affects a movement, and is a minor mouthful to explain. It's very simple, but the panel space it takes up would've been a bit much earlier, plus I'd feel the need to repeat the explanation, so here it is.