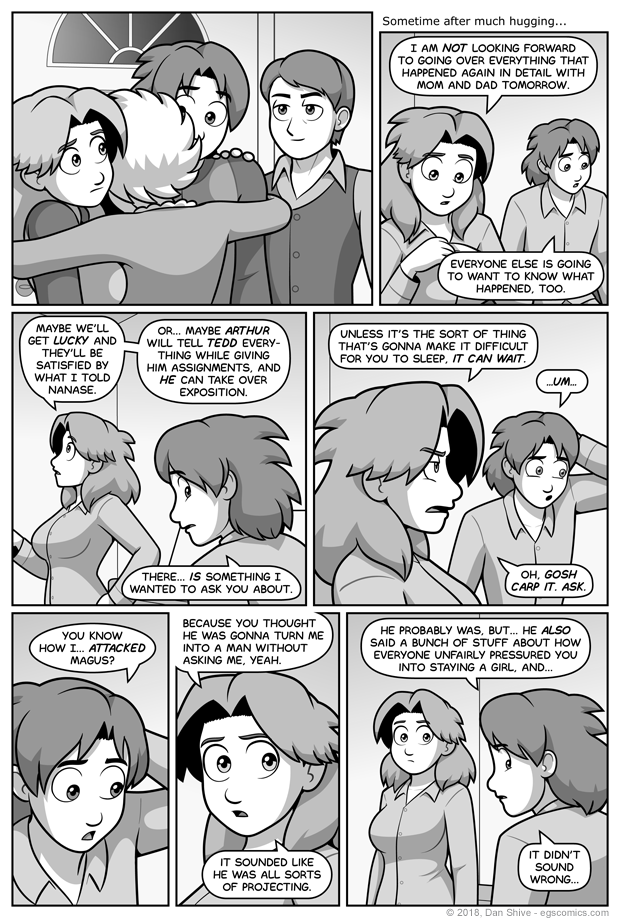 Posted June 18, 2018 at 2:33 am
- Super ultra mega relevant conversation about Ellen liking being a girl

- Ellen having called Nanase
- "Much recapping later" (next comic, how Ellen knows this detail about Elliot attacking Magus)

It's honestly scary to me how close we were to the triumphant return of The Writer's Block showing up to herald the occasion of me feeling stumped writing wise.

It's not that this scene wasn't planned. On the contrary, this conversation is one that I've known was coming for months now. It's just I had a clear picture of the middle and end of the conversation, but not the beginning.

I also felt we should see the Dunkel parents, but didn't want to devote a whole page to it, and I was considering showing other things first, and... My mind was a bit of a mess, you see.

I finally fell upon the "obvious solution is obvious" solution of a single panel with the Dunkel parents, and having the conversation begin with the matter of having to talk to everyone about the night later, and the awkwardness of Elliot even asking this after the night they've had.

I had originally considered that awkwardness a problem, but hey, it gave me my opening. It figures that the solution to something in this comic would be an awkward moment.