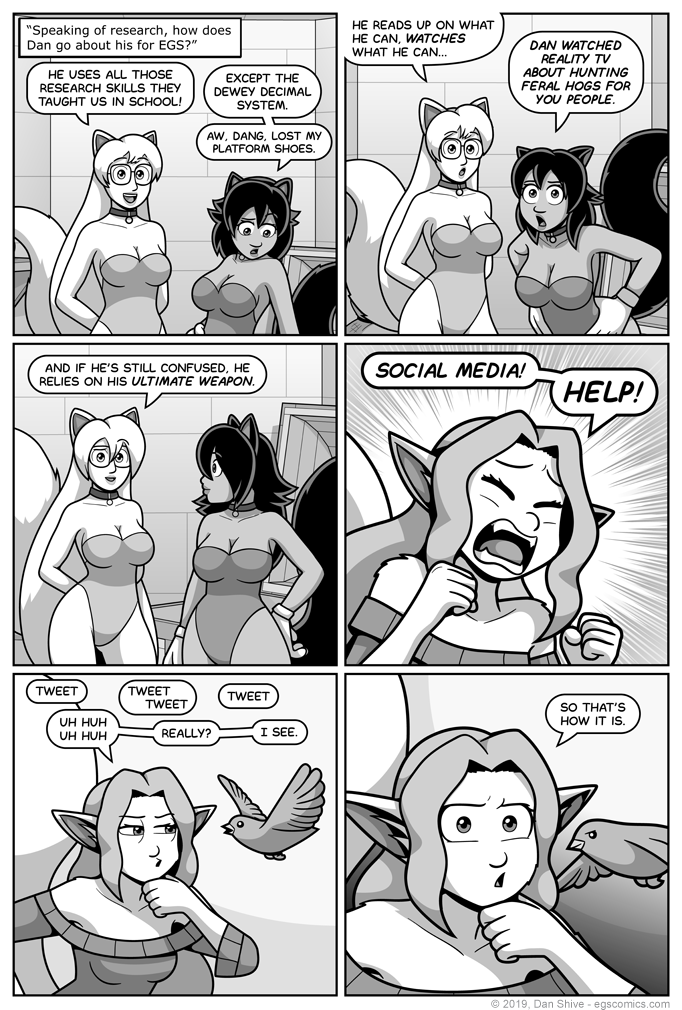 I know this isn't much of a question, but it has been asked, and it had to happen after I thought of that last panel. That said, it is absolutely true that I will ask my followers for information and feedback on things.

On the subject of research, after the previous comic, I would like to note that I don't think it would be impossible for me to intentionally include a character within the autism spectrum. I just don't feel prepared to do so at this time, and would require assistance if I ever were to do so, as the research I have already done simply on the basis of trying to figure out things about myself has more often than not left me confused.

I feel I possibly have a clearer picture today than I did the day before, however, thanks to someone sending me a list of potential indicators. This list included relaxing via movement (as opposed to standing still), fidgeting, desire for tactile feedback, issues with speech development, being oversensitive to certain stimuli, not naturally getting sarcasm or the concept of personal space...

Really, there was a lot there, but what stunned me about the list was that there was only a couple things on it I wasn't sure about due to my age, and everyone I was sure about, the answer was "very yes".

I hate standing still. I always pace and move around if it's an option. I've just now noticed I'm tapping my foot back and forth for seemingly no reason while typing this, which isn't at all out of the ordinary for me. I'm back to this part of the commentary after writing the rest for editing, and I started shaking my legs at some point for reasons that are beyond my awareness.

I have a speech impediment that can still show at times if I'm unfocused or tired, and had to take special speech classes with like 2-3 other people out of the whole school all the way through Junior High.

I'm really sensitive to sound. I turn TVs and such down much lower than most people, and I don't know if this is weird, but I can often hear if something is simply plugged in even if it's not doing anything. I have trouble working in rooms with lots of people talking. In college, had trouble getting things done in the computer lab because I couldn't filter out everyone talking, and I had a tendency to use headphones because I had to block everyone out.

And yet, somehow, I often have trouble hearing what people have said and have to ask them to repeat themselves, which I find all sorts of weird.

I'm uncertain about the sarcasm thing, but I I've mentioned incidents of misunderstanding, and I'm unsure about the personal space thing, because, because I don't like being touched or big crowds these days.

And I have no idea if this is related to anything, but I have this weird thing in which I rest my arm on top of my head when lounging in a chair, and I've never had any idea why I do it, and now I'm being told about how some people feel security from weight and pressure being on them, and I'm wondering if it could explain even THAT nonsense.

So... Um... I don't think a lot of that is applicable to my characters? I never really thought about most of that before now beyond occasionally thinking "yeah, that's one of my quirks", but... I kinda sorta have to go from "I don't know, but it would explain a lot" to "I don't know, but it sounds probable".

My understanding is it's alarming expensive and lengthy to get a diagnosis, however, and at this point, I don't really see what benefit it would be to me beyond being able to say something with greater certainty. As is, I can read more up on it and try things that are suggested for relaxation and the like and see if they work for me. At my age, as I am now, that seems the most sensible course of action.

Anyway, yeah, one of the first things I did after waking up was read that list, and it blew my fragile little mind. Also, I started writing this commentary feeling like I didn't know what I was going to write, and it suddenly snowballed into a... Well, I was going to say "a stream of consciousness", but that would suggest the snowball melted, wouldn't it. Um...

Well, you get what I mean. I wrote a lot. And wound up sharing a lot of personal stuff. Ah well. For the record, my speech impediment in primarily issues with "th" and "sh". I have, at times, effectively said "vat" or "fat" instead of "that". I have chosen to find that amusing rather than be embarrassed by it, so enjoy!