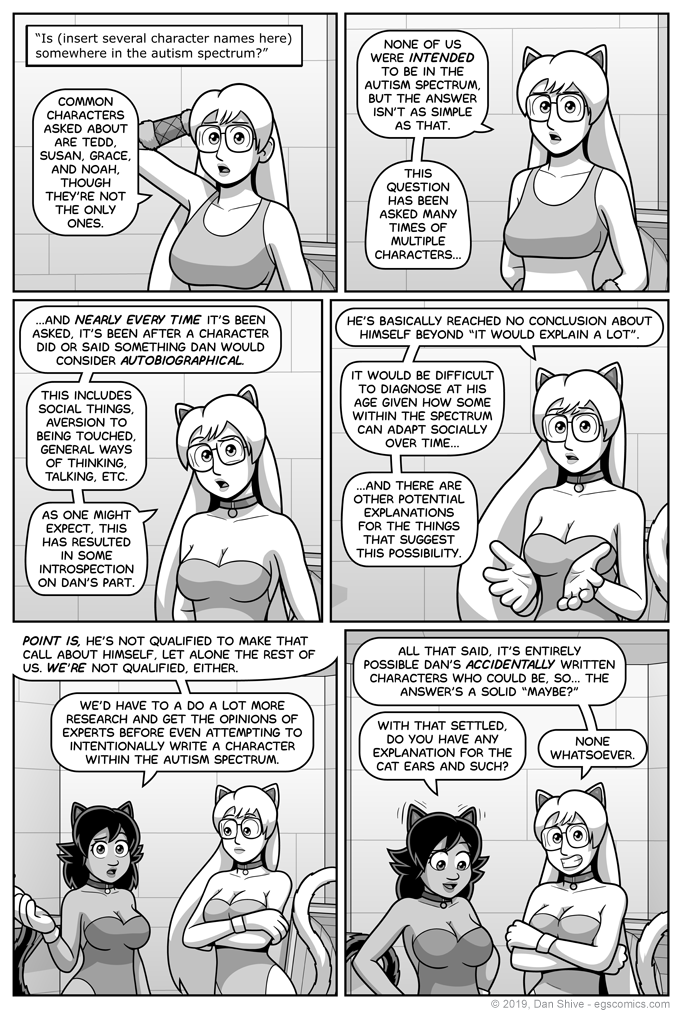 The answer to Lisa's question was that there wasn't room for a goblin fight in the background to lighten the mood.

There's a whole lot of "maybe" here, both in regard to my characters and myself. None of what Amanda says on the subject here is a joke, and I don't think it's unreasonable that it's left me with a lot of questions.

As for the "it would explain a lot", one example is that I've considered it might explain this:

Other people felt strange and alien to me while growing up, and I can recall several incidents in which I utterly failed to pick on body language, expressions, and tones of voice. I recall these incidents clearly due to how bad the responses were, and the embarrassment of having misread situations that, in hindsight, seem like they should have been obvious.

I learned how to read people over time the hard way, and I also learned things about faces and body language from learning to draw. I eventually reached a point where it seemed like I was picking up on things other people were missing.

I used to think I had some natural ability in that regard, but looking back on my own development, I think it's a skill, not a talent. I suspect I'm naturally terrible at such things, but that terribleness forced me to learn such things the hard way.

Thing is, that's all just a guess based on what I can remember of my own past. Perhaps I don't remember things as clearly as I think I do.

Even if I do remember clearly, there are potential other explanations. This is the sort of thing that would have been far easier to confirm when I was younger.

But it's also just one thing on a list of reasons why these questions make me wonder, and I can't help but do so. As I've said, it could explain a lot.

A second thing it would explain, obviously, would be why people wind up asking this question so often about characters I write.