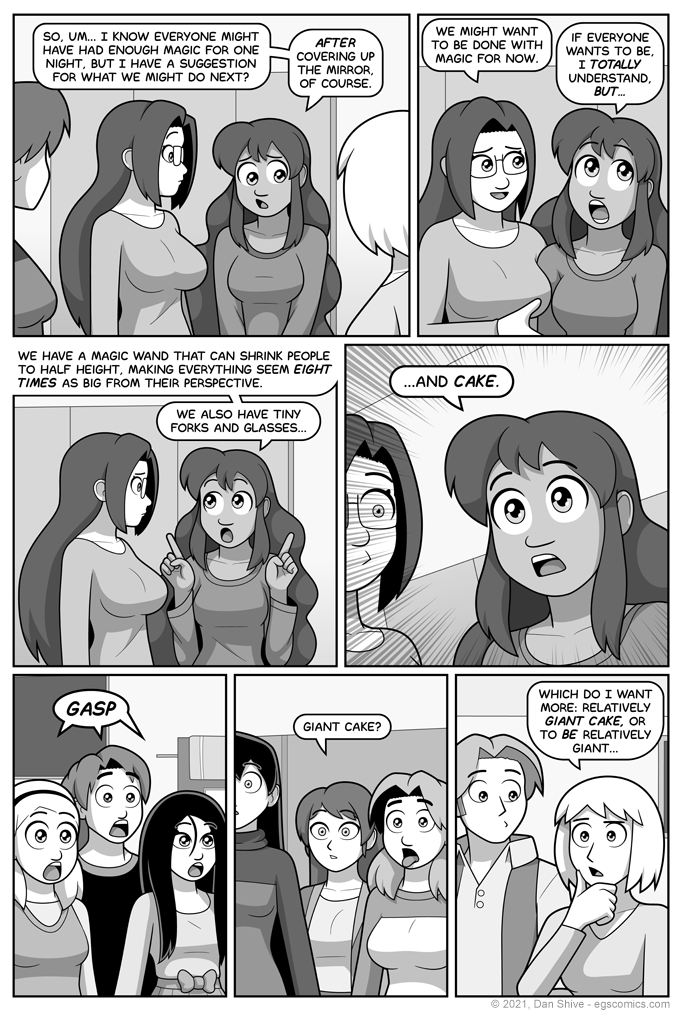 This is a difficult choice for Diane, but I can't imagine anyone passing up the chance to have a slice of cake that appears eight times as big while having the exact same calories as a normal-sized slice.

The tiny forks Grace mentions are likely the sort used when eating crab (and maybe other foods, but that's MY frame of reference, thank you very much), and there are a lot of potential options for relatively tiny glasses.

This page was posted absurdly late for a few reasons. The first was simply that I was behind schedule to begin with, and a second was because of a bit of writer's block when it came for an activity that could involve more magic, but also be chill, fun, and make sense for the party.

If this answer of "omg relatively giant cake being suggested by Grace specifically" seems obvious, many things do in retrospect.

Since we're nearing a point of genuinely wrapping up this storyline, and since I'd said "Friday comic Friday! For reals!", I decided to share this page once it was done, and push the next one to next Wednesday. This gives me a chance to eliminate writing last minute as factor, and potentially actually have the comic done before, y'know, the day before.

Once this story arc is over, which is still several pages away, I intend to take at least a couple weeks off from story comics. I'll decide when we get there how much time seems sensible. I actually have some of the next storyline written, which is unusual, but it happens sometime.