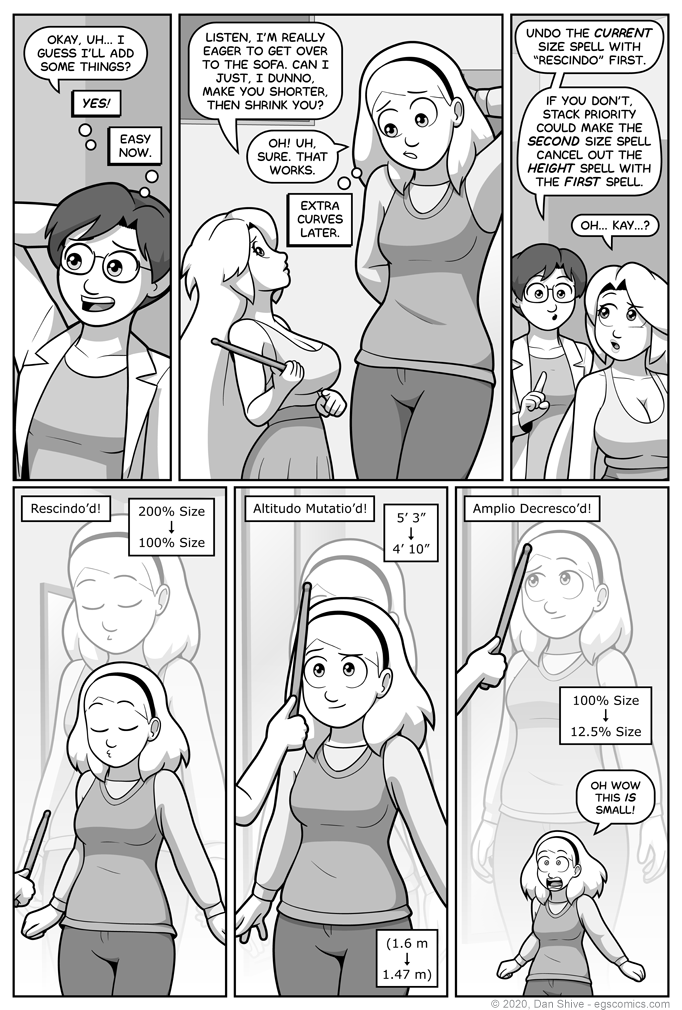 I literally opened up the English-to-Latin side of a dictionary I bought and just went with whatever words sounded good together, so my apologies to Latin enthusiasts.

Meanwhile, to those who hated Latin classes, and take perverse pleasure in the dead language being poorly used? High-fives. High-fives for all.

Anyway, Rescindo was listed under "Cancel", Altitudo under "Height" (I actually said "oh my god I love this" when I saw Altitudo), and Mutatio was under "Change".

For whatever reason, I find the metric conversion being in parentheses at the bottom-right corner of the panel amusing, which is good, because it would bug me not to include them in some way.

I would boldly claim I would only use metric if not for most of the readership being in a country using feet and inches, but that would make me a metric poser. I'm still super used to feet and inches, and I'd need a conversion if I saw "1.6 m" out of context.

That said, having to do that math would annoy and enrage me, filling my heart with hatred and disgust, and I believe in doing unto others as I think would be lovely done unto me, so conversion-ahoy (if not in the comic itself, then down here).

Imagine stacking similar-but-stackable spells like a pile of blocks. Spell Aye is on the bottom, and spell Bee is on top.

If you want to cast a spell that takes Bee's place, it's not a problem for Aye. It just stays on the bottom.

If you want to cast a spell that takes Aye's place, however, anything on top of it is falling off in the process.

So, if Tedd's right about how the spell stacks, the Height spell would have been stacked on top of the first Size spell, and then fallen off as a result of the second Size spell replacing the first.

Sarah would be shrunk, but proportionately, she'd be back to her original height.

The term "stacking" enchantments might get used loosely, some enchantments stack, some replace each other, and some have a more side-by-side arrangement.

This seems a dry note to end the commentary on, so please imagine a character throwing a pie at another character. Thank you.