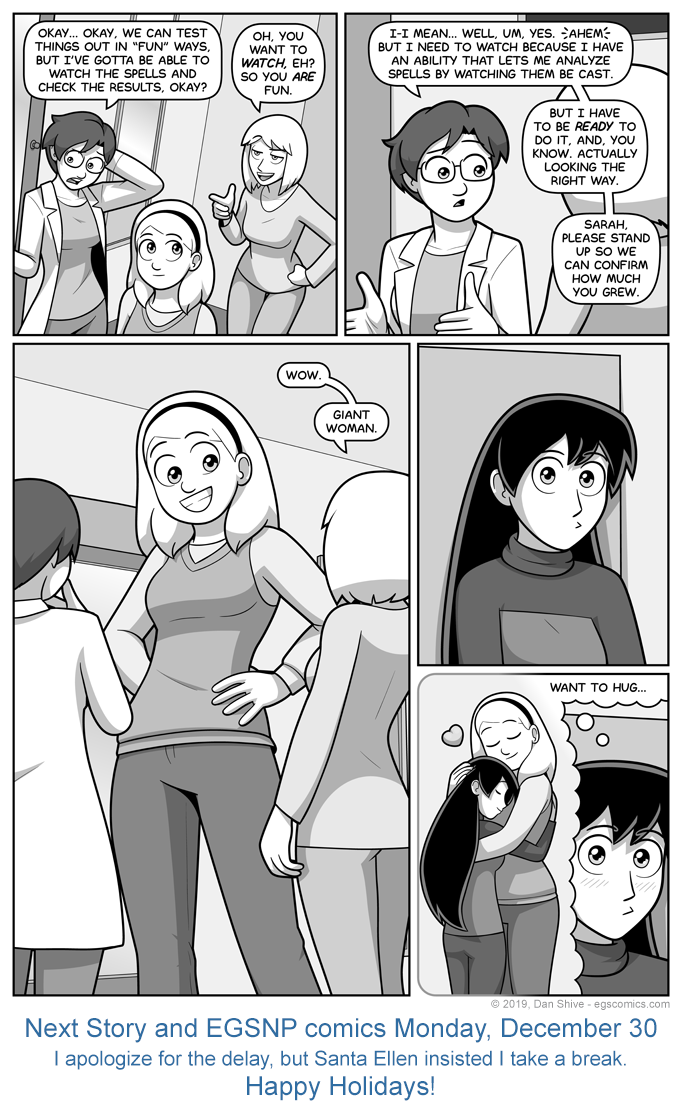 Once I considered what the next three days were going to be like for me, and that I still have to finish Monday's EGSNP at time of writing this, I decided I really needed more than one holiday... well, day off.

Which I'd like to have avoided, though there is a new sketchbook with Santa Rhoda and shrinking nonsense, and I hope to have another with Santa Ellen for Tuesday (and I'd really better, now that I've noted it here (EDIT: and I did)).

EDIT: That sketchbook will be sometime during the day Tuesday.

I will naturally tweet when Monday's EGSNP and Tuesday's sketchbook are up.

As for THIS comic, the only reasons Diane isn't leaning over with her hands on Sarah's shoulders while talking in panel one is because it seemed a little too forward, and the overall panel composition was rubbish. I still like the idea of her in that pose while saying what she says, though.

I can't remember if Tedd's recapped her ability to see how spells work in this storyline, but even if she had, it's new to Diane!

(Yes, I feel compelled to justify recaps even if it 100% makes sense in context for the characters to give the recaps)

I'd prefer the last panel with out the "want to hug" text, but I really wanted to emphasize the hug-specific nature of this. My intent wasn't Susan suddenly super attracted to giant Sarah, but rather "ye gods, that's one huggable Sarah right there".

Granted, death of the author and all that, so people can conclude what they like regardless of what I write here, but I wanted my intent clear anyway because of past things established about Susan and such.

With infinite time and panel space, I would have had Justin quote a game called Altered Beast by saying "RISE FROM YOUR GRAVE" in a dramatic voice after Tedd asked Sarah to stand. This would have confused absolutely everyone, and was inspired by my own previous tendency to jokingly say that line from the game at weird times.

Given that it would have taken about half a comic, require drawing a lot of blank faces, and not contribute at all to the story while being an obscure reference, however, I decided not to include it.

Given that Altered Beast is a game in which floating power ups make the player more muscular before transforming into beast forms, however, I'm sure I'll find some excuse to reference it again in the future.