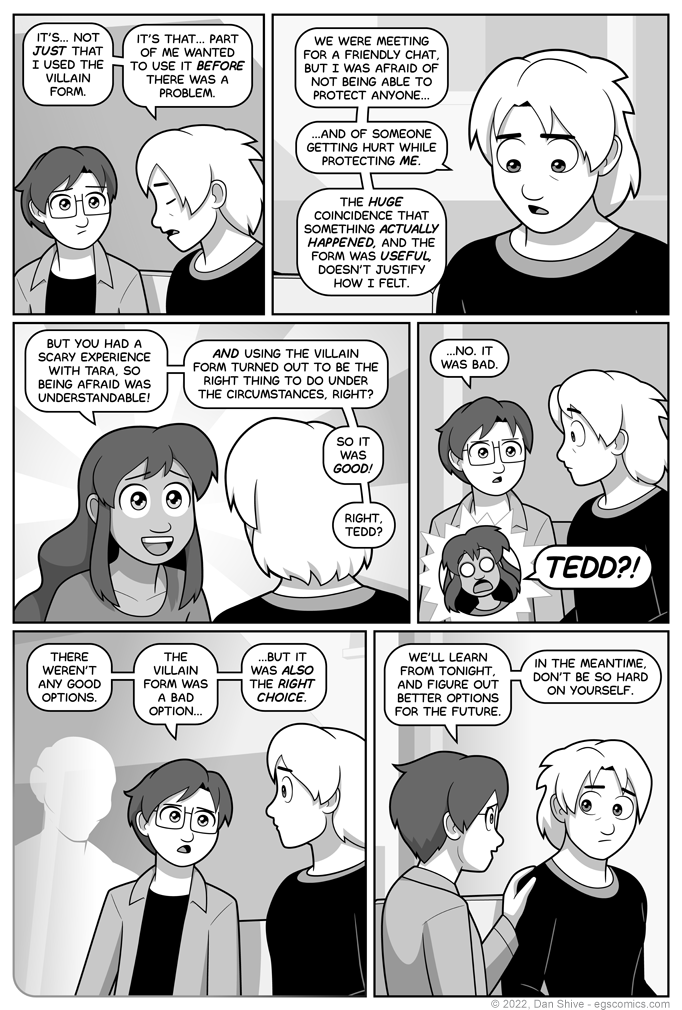 - "...There will be moments when there are only bad options to choose from."

There are two reasons for this.

The first is that a personal matter that will affect my work schedule next week, and the second is that I'm not as ahead on pre-production as I need to be to have a steady work flow.

The former can't be helped, and the latter is my mistake.

Given the latter problem, I've decided to have the delay now instead of later so I can do my best to correct it.

After this, it will hopefully be a while before any more unexpected delays.

Granted, by their very nature, unexpected delays are, well, unexpected, so it's a bit tricky to predict.

This page was difficult to write, and that mostly boils down to Elliot's feelings. It's the sort of thing that potentially difficult to convey given all the mixed feelings involved.

I've seen a few interpretations of Elliot, and I will say this: Authorial intent is Elliot does enjoy fighting bullies and jerks (which he finds worrying), but he was NOT eager to fight griffins. He doesn't think of Andrea and Tara as bullies and/or jerks.

He was scared of not being able to fight well against griffins, however, and of not even being as strong as in his first encounter with Tara. There was a feeling of powerlessness, and that scared him.

Which hopefully I got across in-comic, but I can't expect everyone to interpret things the same way.

Side note: I know I've said it's fine to ignore authorial intent, even when it's my own. This story is ongoing, however, and I'm going to be writing based on my own intent, so... It matters in that my future writing is probably going to reflect my own intent, if nothing else.